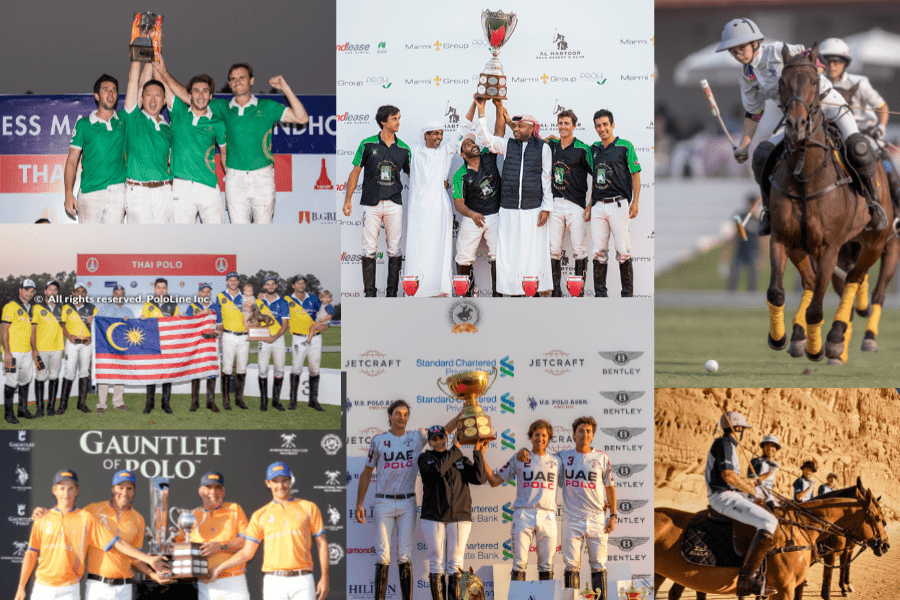 In the aftermath of the COVID-19, which has been declared a pandemic, polo tournaments around the world were forced to be cancelled. However, much has taken place so far, with action in Thailand, Dubai and USA, among others. Here are the most important moments from the first three months of 2020.

AlUlA Desert Polo, the first official polo tournament ever held in Saudi Arabia, formed part of the Winter at Tantora cultural festival, organised by the Royal Commission for AlUla, held in the exquisite UNESCO heritage site in the AlUla desert.  The most important patrons of the area – Amr Zedan, Mohammed Al Habtoor, Alia Al Maktoum – played alongside the four La Dolfina players. Historic.

The Chinese team, commanded by Shilai Liu, claimed the most important trophy in Asia after beating locals Thai Polo Team in the final. It was the first ever Thai Open title for this lineup: Shilai, Darío Musso, Diego Gómez, and Toly Ulloa.

After an unforgettable 2019, where La Familia claimed both the Thai Polo Open and the B.Grimm Thai Polo Masters, Mohamed Moiz’s organisation were able to come back in 2020 and win the latter tournament. With six 14-goal teams in competition, La Familia (Mohamed Moiz, brothers Matías and Andrés Vial, and Ignacio Ithurburu) beat Royal Pahang, a team also from Malaysia.

At only 15 years old, Sabrina “Beanie” Bradley, surprised the polo world with her impressive talent and strength, her spectacular goals and superb understanding of the game. Last year she was recognised in England, winning the 2019 Victrix Ludorum, and this year she shone in Thailand, claiming the Queen’s Cup Pink Polo with La Familia. One to watch.

After losing the Dubai Silver Cup final, Sheikha Maitha’s organisation set their sights on the most important tournament in the Middle East. UAE defeated  Sheikha Alia Al Maktoum’s AM Polo to win the title for the second year in a row thanks to a superlative performance from the team’s three pros, brothers Tomás and Benjamin Panelo, and Tommy Beresford, who were well guided by their coach, Lucas Monteverde.

They were very close to snatching the title in 2019, but they lost the championship game to a powerful Pilot. But this year they had a second chance. After overcoming the qualifiers with convincing performances, they faced and beat La Indiana in the final. The victory meant that Camilo Bautista, David Stirling, Francisco Elizalde, and Mackenzie Weisz took the first leg of the Gauntlet of Polo.

FIRST DEFEAT FOR PILOT IN THE GAUNTLET OF POLO

2019 was an unforgettable year for Curtis Pilot’s organisation: they won the three titles of the Gauntlet of Polo, and finished the year winning the Argentine Jockey Club Open. They were one of the favourites for the 2020 season, but they had a major obstacle in their way: La Indiana. Bickford’s team beat them in the semifinals of the CV Whitney Cup, taking away their historic undefeated record in the 22-goal.

TOLY ULLOA SCORED THE FASTEST GOAL OF THE YEAR

Only 11 seconds after the first throw-in of the Thai Polo Open semifinal between Tang Polo and La Familia, Carlos “Toly” Ulloa stole the ball and made a great run for goal, scoring what is so far the fastest goal of the year.

Organised by Valiente and Grand Champions, the highest handicapped series outside Argentina celebrated its second season. Action was interrupted due to circumstances of public knowledge, but many of the best polo players in the world played the WPL from February until the suspension of play.

COVID-19 TOOK OVER EVERYTHING

An unprecedented situation in the modern history. The Coronavirus pandemic is the current protagonist, and only God knows until when. As death rates around the world rise, the virus put an end to polo for the time being.