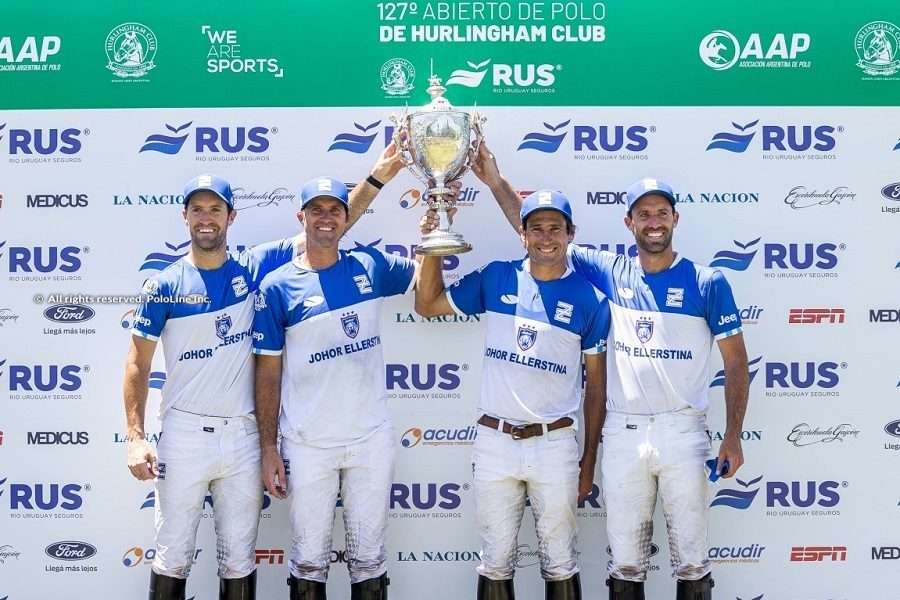 Ellerstina defeated RS Murus Sanctus 16-11 to claim the Hurlingham Open, the second leg of the Triple Crown in Argentina, following the final played at the Alfredo Lalor grounds of the Argentine Association of Polo, in Pilar, on Sunday, November 22.

This was a very different final, indeed: While the Pieres family team was on the field, La Dolfina were not. This year, Ellerstina were up against another contender: RS Murus Sanctus. Ellerstina and RS Murus Sanctus have clashed previously this season, in the Tortugas Open semifinals, in a contest that saw Ellerstina emerge victorious (15-13). Understandably, we were expecting another tight clash, but it wasn’t so close this time…

RS Murus Sanctus scored the first goal within seconds of play thanks to a field goal by Sapo Caset, but Ellerstina performed solidly in the first half. Led by a brilliant Facundo Pieres, who is very accurate when it comes to scoring field goals and penalty conversions, Ellerstina displayed solid team work. They held RS Murus Sanctus back, who then struggled to get back into the game. Following two chukkas of Ellerstina dominating, RS Murus Sanctus made a comeback in the fourth. They outscored Ellerstina 2-1, but the Pieres-Ulloa lineup maintained a four goal lead (10-6) at half time.

Ellerstina displayed their best polo in the next two chukkas, outscoring RS Murus Sanctus 5-1, while blocking every attempt their opponents made to score. But far from giving up, RS Murus Sanctus gave a spectacular battle in the seventh chukka, scoring three unanswered goals. With only one chukka left, and Ellerstina leading by only three goals (14-11), it seemed like there was still hope for RS Murus Sanctus.

But their efforts didn’t pay off. Ellerstina seized the reins in the last chukka, with Hilario Ulloa and Facundo Pieres coring a couple of fantastic goals to seal Ellerstina’s 16-11 victory and claim their second title of the 2020 Triple Crown. The title will undoubtedly give Ellerstina confidence to take on the the next challenge, the Argentine Open Championship, which kicks off next week.

Later in the evening, La Ensenada La Aguada won the Subsidiary Drysdale Cup, after a 12.5-10 over La Irenita.