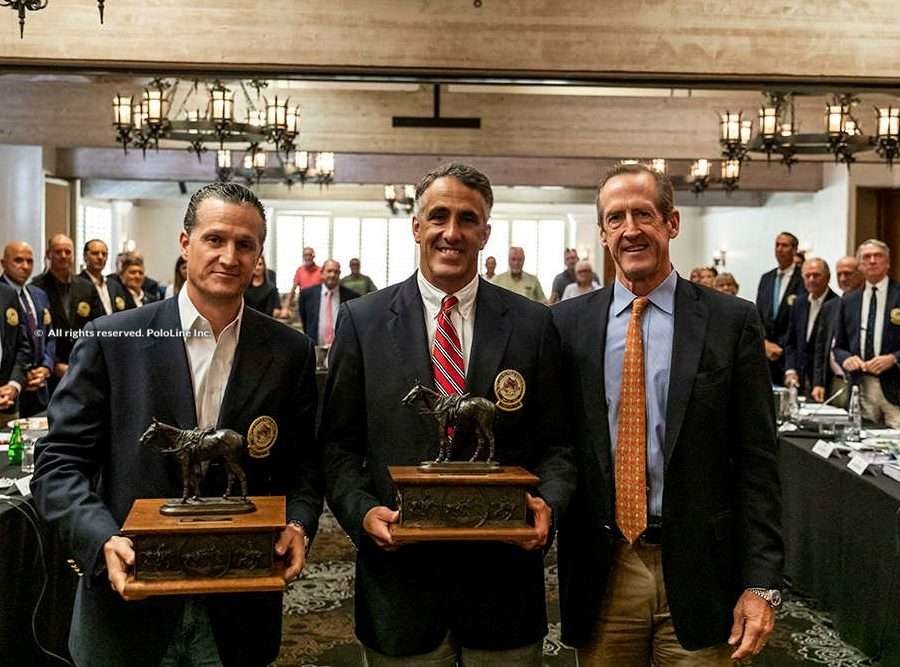 Raising the C.V. Whitney Cup twice in the 1980s, Stewart Armstrong joined the ranks in the inaugural GAUNTLET OF POLO on Aspen, demonstrating his skill and support prior to assuming the role of incoming Chairman in October 2019. A third-generation player and formidable 7-goaler at the height of his career, Armstrong has participated in grass and arena tournaments both nationwide and internationally in Argentina, England, Guatemala, Pakistan and Mexico. Taking great pride in riding and selecting an exceptional string of horses, Armstrong began breeding polo ponies in his twenties, and over three decades later has amassed a wealth of knowledge and experience in the breeding industry for both polo and horse racing. Previously serving the USPA membership as Secretary since 2017, Armstrong is a dedicated advocate for polo, serving on multiple USPA committees and the Hall of Fame Board and Selection Committee.

Born in Corpus Christi, Texas, the South Texan studied finance at the University of Texas in Austin, traveling 80 miles on the weekends to play polo in San Antonio. Meeting his wife Catharine Coble (C.C.) during college, the couple now resides in San Antonio (and spends the summer in Aspen, Colorado) and has three children (Coble, Mia and Larkin) and six grandchildren. Receiving the Hugo Dalmar Trophy in 2019 and 1984, Armstrong continues to embody the characteristics of sportsmanship both on the field and in service to the USPA. Sitting down with Armstrong at the beginning of his term, he discussed the value of establishing trust and his vision for the long-term benefit of the Association headed into the upcoming year.

Why did you decide to assume the role of the new USPA Chairman?

When Chip Campbell informed me that he intended to step down, he asked if I would be willing to serve. I agreed because I love the game of polo. Like so many of us, I have received a tremendous amount of value from the relationships which I’ve built throughout my time in the sport. Polo is a wonderful part of my life and I’m happy to help improve it in any way that I can, and spend energy on the membership’s behalf.

What qualities or experiences from your past make you most suited for the position of Chairman?

I have served as the Chairman of Kleberg Bank since 1990, and started with them in 1979. Also, my extended family owns an agricultural corporation which has legacy assets that my cousins and I share. Many years ago, we formed a Board of Governors to manage the family’s usage of these assets and I have chaired that committee for the past 20 years or so. It’s a large family with roughly 50 members and between 70-80 children.

Both of those experiences have given me the confidence that I can manage sensitive issues in an organisation where people know and care about each other, and I can also manage a very structured environment. The USPA has federal oversight with a lot of rules and policies involved and that requires people’s trust. I’ve learned from my experience with the bank that maintaining your customer’s trust is necessary and absolutely required. The USPA is dealing with a lot of resources that need to be considered and managed.

What is your equestrian background, and how did you become involved in polo?

My father was a rancher and he played polo, earning a 6-goal handicap in his prime. My paternal grandfather also got his start in polo as a rancher and to augment his income he participated in the Remount Service, a government paid initiative to breed qualified horses for the cavalry. My grandfather had a breeding program with a couple hundred horses he trained and he sold the ones he could to the military—the military guaranteed a price for geldings who didn’t have any white markings. All the leftover horses that did not qualify for the military purchase program were converted into polo ponies.

My grandfather was also one of the founders of the San Antonio Polo Club [San Antonio, Texas]. He built a stable in San Antonio and he used it to bring horses up from the ranch and sell them as polo ponies to supplement his income as well.

My older brother, Charlie, and another brother who passed, also played polo. I started with a foot mallet, then on a bicycle, and then on horseback at age 11. I played my first tournament game when I was 13 at Cowdray Park Polo Club [in England] in 1969. We won so I played my second match against Prince Charles, and we lost. In the summers during high school I played on ranch fields in South Texas with family friends. On occasion, I played in Brackenridge Park in San Antonio, Texas.

What are the most important initiatives you have identified as incoming Chairman?

I think Chip [Campbell] did a great job of instilling trust back into the Association and that was something I tried to help him build as Secretary. He worked very hard to show that he was trustworthy before he was made Chairman and continued to do so once in office. Trust will be a primary tenet of my administration and any administration that comes after me needs to have that in place as well. I intend to manage affairs in a manner which allows people to be well informed and confident that decisions are being made for the right reasons.

There are three benefits which have been fundamental to the Association since it was founded. Players join the Association to get a handicap, to play under a common set of rules, and for the opportunity to participate in long-standing tournaments which carry a great deal of prestige. I think there is some confusion regarding what members receive with their annual membership fee. My message is that we need to deploy our resources into strategies that make polo better for everyone. This encompasses playing members who are competing, spectators and apparel customers. My belief is that if we can make polo better for those groups of people then we will have done our part to make the polo community as healthy and vibrant as we can.

What are your broader goals for the Association?

A long-term goal I have is to discuss with the Board how, and under what conditions, the USPA could make polo better for everyone by owning its own polo fields. It is a delicate, controversial subject and it’s not the time to invest in that yet, but I think there will be a time in the near future when that strategy needs to be defined, fine-tuned and accepted by the Board of Governors.

I don’t intend to do anything about this subject without building a consensus behind it first because that’s the only way to manage this Association. I intend to try my best to confidently and comfortably build consensus around ideas and bring people on board at their own speed. It is not something that needs to be rushed, but rather a question we need to answer as an Association.

Do you see yourself playing high goal again in the future?

The Aspen opportunity was really unique because of Polito Pieres and I agreed to play in the 2019 GAUNTLET OF POLO™ because of his involvement with the team. I don’t want to play in high goal just to play, I’ve played at that level over the years and I know what it takes to put together a competitive team that I believe can win. Playing with Aspen was just one of those once in a lifetime experiences and it just happened to fall into my lap. I jumped on it and I really enjoyed it.

How do you plan to make progress on the Horse Registry proposed by Chip Campbell?

What I’ve discerned in looking into a horse registry for polo is that unless there are restrictions placed on tournaments which are limited to only registered horses, then the value of a registry is not very high. In the horse racing industry in order to compete you are required to have a registered entry, so it justifies the fees associated with registering a Thoroughbred. However, if polo tournaments are not restricted to only registered horses then there is no real financial justification for spending the money to keep track of a horse’s pedigree.

In 2006 Sunny Hale started the American Polo Horse Association to recognize polo ponies in America, which is now being perpetuated by Melissa Ganzi. Currently there is not a compelling reason to register your polo horse and I think that’s one of the difficulties that anyone who tries to move the registry forward will face. Instead we could create a catalog of the best horses competing in the United States and track them for a few years to see if the catalog would be worthy of converting into a registry, depending on how polo evolves.

We are planning to catalog horses that play at the highest level beginning with the Florida winter season so that we can keep track of who they are and how they were bred. Hopefully this will create some value for people who are breeding polo horses. It may add value to them as they are trying to make their horse breeding businesses profitable. The catalog will also help create credibility for those initiatives.

What are the qualities that you think make a high caliber horse?

My qualifications are a little different than the modern polo player. If you ask a 10-goaler what they want in a high-goal horse they’ll likely say a horse that has a burst of speed. They want to be able to check down, make the opponent check down and then burst by and still have possession of the ball. One of the primary elements top players look for is that burst of speed from a standstill or slow gait.

However, I do not play that way because I like to stay moving. My thought is that by moving and anticipating, I create momentum. For me, a top polo horse is one that is relaxed and very light across the neck, that will rate, very comfortable, and with a lot of speed. The rest is just teaching the horse to trust me, the bridle I put on and the cues I give, that way he can become an incredible partner that reads my body language.

What would you like the membership to know as you take office?

I take the assignment of Chairman very seriously and view it as an incredible opportunity. I’m extremely confident that I have the perspective and understanding of polo to address whatever we as an Association agree needs to be accomplished. I intend to pull everybody together and get them to work together and contribute. I can inspire, instil, trust, and help people see things from a new perspective so that we can all work together in a positive way.