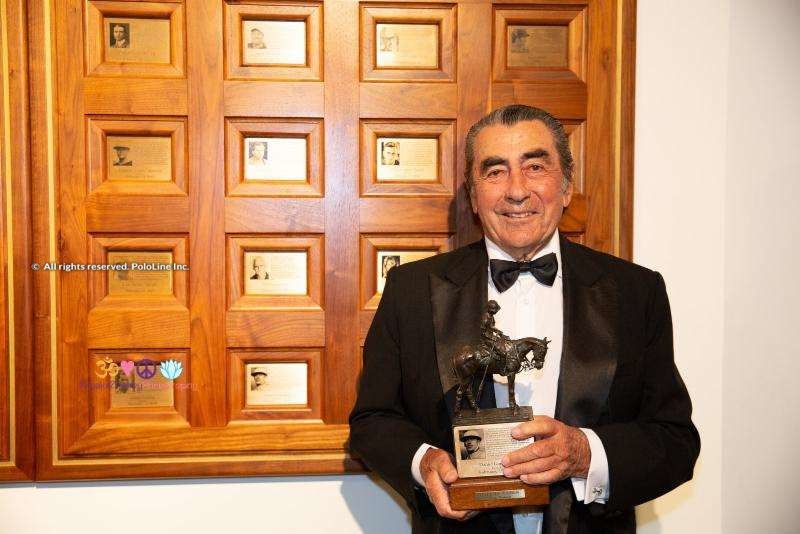 The polo community gathered on the evening of Friday, February 15, to celebrate the 30th anniversary of the Museum of Polo and Hall of Fame Induction and Awards Dinner Gala. On this milestone occasion, six pillars of the sport of polo were recognized for their achievements: Daniel Gonzalez, Gerald Balding, Karlene Beal Garber, John. B Armstrong, and polo horses Mr. Polo and Conover.

The induction ceremony was initiated by Master of Ceremonies and Museum Chairman Marty Cregg. Each guest at the dinner was given a very special gift, PoloArt the 2018 Season, a collection of photos and artwork by Melinda Brewer. Published by the Museum, this project celebrates the great ponies of our sport each season, sponsored by Iconica Foundation and Central New York Community Foundation, with additional funding support from Karlene Beal Garber.

The first awards of the night went to two of polo’s greatest equine heroes, Conover and Mr. Polo. Conover, owned by 10-goaler Harry Payne Whitney, was a horse that helped put American Hall of Fame players known as “the Big Four” on the international polo map in the early 1900’s, serving as a favored mount for Whitney’s great teammate Monty Waterbury. Accepting the award was Whitney’s grandson, Leverett Miller. The distinction awarded to Memo Gracida’s loyal war pony, Mr. Polo, was accepted by Mimi Gracida Boyle on behalf of Memo, who wrote a touching speech read aloud about the memorable Mr. Polo, an off-the-track Thoroughbred known for his timeless polo career which helped Gracida win an exceptional eight U.S. Open Polo Championship titles.

John B. Armstrong, a trailblazer of polo across south Texas and beyond, was honored with the Posthumous Iglehart Award for outstanding lifetime contributions to the sport. Armstrong, a 6-goal handicapper that played polo for 65 years, was best known for his long-standing influence and example of sportsmanship both on and off of the field. The award was accepted by John’s son, Stewart Armstrong.

Karlene Beal Garber was the living recipient of the Philip Iglehart Award, surrounded by an entourage of family members supporting her in attendance. Garber, part of one of the most prominent polo families, has given back to the sport for many years through her charity work with the Polo Training Foundation, the Federation of International Polo, and for the good of the sport in general.

In addition, Garber had an exceptional career on the field, making history in 1999 with her all-women’s BTA team of Caroline Anier, Susan Stovall, and Kristy Waters by defeating the entire field of 13 mixed teams in Eldorado Polo Club’s January 4-goal league. “I’m humbled and thrilled to be in the Museum of Polo and Hall of Fame,” said Garber. “It is the honor of a lifetime.”

Gerald Matthews Balding, a superstar of the Golden Age of polo in the 1930s, was chosen for the Posthumous Hall of Fame category. Balding was a 10-goal player from England that came to the United States to help teach the sport to Americans. Balding’s successful career spanned the globe in England, the United States, India and Argentina, with highlights including winning the U.S. Open Polo Championship in 1935 and 1936, and the Monty Waterbury Cup in 1930 and 1935. The award was accepted by his daughter Gail Balding King.

Selected as the Living Hall of Fame Award recipient, Daniel Gonzalez accepted his award in style. The U.S. rated 9-goal player and the Argentine 10-goal player was there to receive the award with overwhelming support from the crowd. Gonzalez spoke candidly about winning the award, “For me, it is a great honor to be here because it is a part of something unbelievable. I am very happy to be inducted with all of the international polo legends. Not everyone has the chance to do that and I am very honored.”