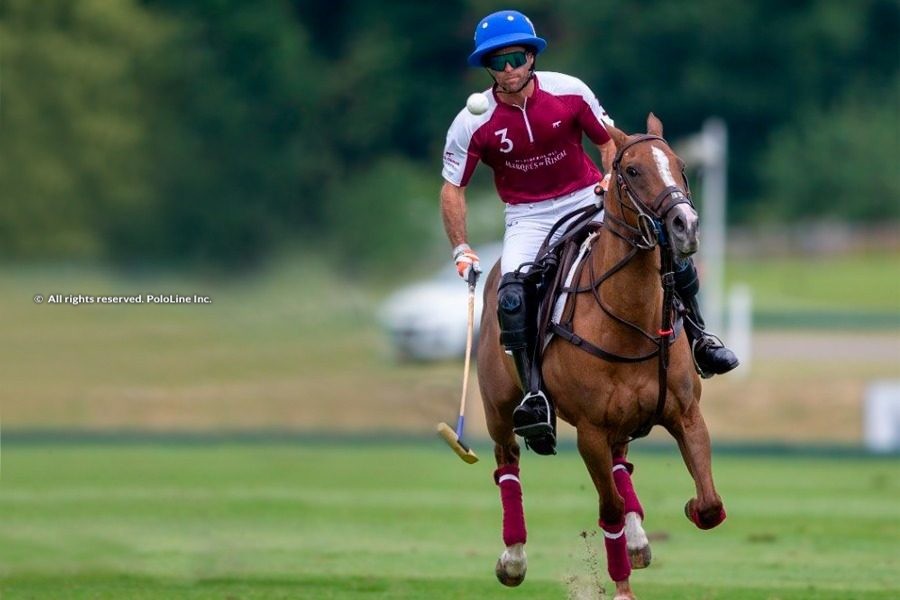 The performance of Alejandro Aznar’s team, Marqués de Riscal, was one of the most pleasant surprises of the British Open Gold Cup. The winners of the 2021 High Goal Gold Cup in Sotogrande decided to make the jump and take on the English high goal season. While they didn’t get off to the best start in the Queen’s Cup, they fought back in the British Open Gold Cup, finishing the league stage undefeated qualifying for the quarter finals. They will now face Park Place on Sunday.

Guillermo “Sapo” Caset shared with PoloLine that Santiago Cernadas’ comeback to the team was crucial in order to improve Marqués de Riscal’s performance in the British Open. “We played with the original lineup, the team we decided last year,” says Caset. “Santi is the soul of the team; in the Queen’s Cup, we had Facu Llosa filling in for him due to the visa affair. Facu played very well, but we had already played with Santi last year, and our system of play was set and had become natural for us. When Santi rejoined us, he gave us the confidence to play the British Open and we could got the results we expected.”

For Marqués de Riscal, making it to the quarter finals undefeated is a remarkable achievement. “It is a joy for Marqués de Riscal, for Alejandro, who came to play in England for the first time, with all that that implies,” says Caset. “There are very strong organisations who have been playing the British season for years, with great horses. Alejandro is very happy and he is playing very well; we played our best and it is a delight for us all, because all the hard work we’ve done has payed off.”

What is notable about Marqués de Riscal’s achievement is that it is not a “traditional” organisation in the sense that there is not a specific structure in terms of horses, as other teams have. This means that every team member had to bring their own horses over. “We are doing very well in terms of horses, but each of us must have their own,” explains Caset. “Marqués de Riscal is an organisation which is growing and developing steadily, so having taken this step is great.”

Park Place, Caset states, is “without a doubt, England’s best organisation.” Marqués de Riscal will play them on Sunday for a place in the semfinals. “They have the advantage,” he continues. “It will be a huge challenge, but we also have big expectations. We know it is going to be a very difficult match, but at the same time, we are looking forward to playing it and have fun. We are enjoying this moment, taking everything step-by-step. Games must be played; our teams is doing well, we have a very good system of play, we have won tough matches, which has given us confidence. We are doing our best to get ready for the challenge, the horses are all very well. I think Park Place are the favourites, but they have also lost some games, as it has been a very competitive season.”

The quarter finals of the British Open Gold Cup are set for Saturday, July 9 and Sunday, July 10:

The final of the British Open Gold Cup is set to be played on Sunday, July 17.