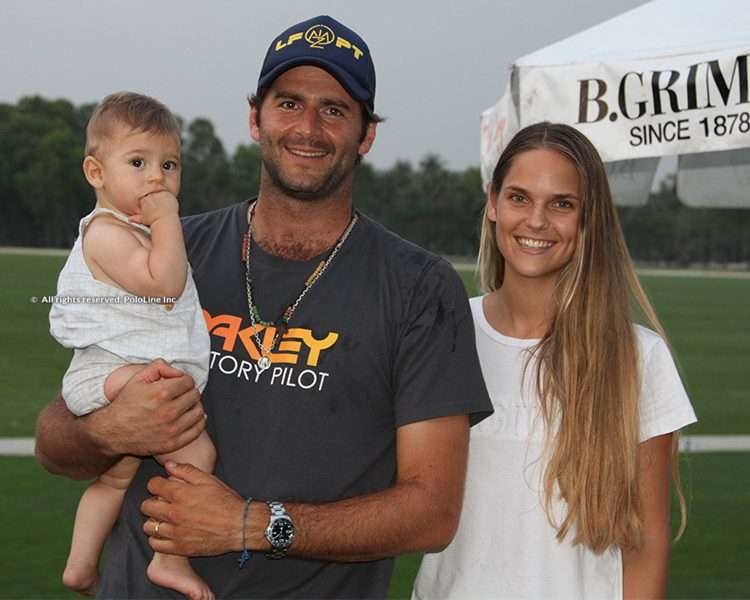 “Travelling with my family is the best thing ever”

Matias Vial, one of the best Chilean players on the international polo circuit, returned to Thailand for the 2019 season after a year away (in 2017 he played the Thai Polo Open with Royal Pahang). And what a success it was! Last Saturday, Vial, playing for La Familia, scored the golden goal in extra chukka to defeat locals Thai Polo and take the Thai Polo Open title.

“I am very happy to have won the Thai Polo Open,” says Vial from Thailand. “We started the tournament well, we then lost by one against Thai Polo, so we wanted a rematch. We managed to win the final in extra chukka; if we had lost I would have died! I think we won because we carefully thought about how to play the match. They are a good team, so we went into the final focused and determined to win. We had already played against them, so we rewatched the video, we saw the errors we made, and we knew what our game plan was. Also, we were very well mounted, and that helped us go into every chukka in a strong position, which is fundamental in a final.”

It was a spot penalty that gave Matias Vial the chance to take the title for La Familia, claiming the 4-3 win after a competitive match. The Chilean played alongside Mohamed Moiz, Agustín Andrada and Shaik Reismann. “Ginés [Bargalló] called me a few months ago and said that they were looking for a 6-goaler, and that my name had come up,” says the 33-goaler. “I said yes straight away. Mohamed and Shaik already knew me, so that is how the invitation came about.”

Unlike in 2017, when Vial travelled to Thailand alone to play the Thai Polo Open, this time he was able to travel with his family. He has been married to María Jesús Donoso for seven years, and they have two children together: Santino (2) and Vicente (7 months). “Travelling with my family is the best thing ever,” beams Vial. “It’s like being at home; when you get back from the stables they are there, or they come to watch your matches. It also gets you up when you are feeling down. The people here in Thailand are very nice, there are a lot of families with kids, too, so there is a great atmosphere.”

The Vial family is an important part of the Chilean polo scene, and they still compete in the most prestigious tournaments in the country. In 2017, Vial won the Chilean Triple Crown with Casa Silva at San Cristóbal Polo & Equestrian Club, in Santiago. His brothers, Alejandro “Tano” Vial (35) and Andrés (21) are also very involved in the polo scene. “My grandfather, father, and my uncles all played polo, even though none of them were 100% professional players,” tells Vial, whose family originate from Osorno, over 900 km south of Santiago. “I always went with my father to the matches, I rode the horses before he played them, I went stick and balling. My father encouraged us to play. Both my brothers are professionals, but Andres is young and is still at university. We started playing kids tournaments, and then I began playing with older guys at age 13 more or less. The first time I travelled as a professional was to Malaysia in 2004.”

San Cristóbal Polo & Equestrian Club, located in the picturesque neighbourhood of Vitacura, in Santiago, is likely one of the most beautiful places to play polo in the world. Framed by the Andes, the club’s number one and two grounds offer breathtaking views of the snowy mountain peaks. The club also has a thriving social scene, and stables around a thousand horses.

“Polo in Chile is at a good place at the moment,” says Vial, 2017 winner of the Thai Polo Cup Argentina with Real Time. “The club has forty teams and there is a good level of play. Polo is also played in the farm and at the beach. The Chilean Open is played ta 24-goals, and this year three 10-goalers went to compete [Juan Martin Nero, Hilario Ulloa and Polito Pieres], so the level is very good. The fields are getting better every year, and much is being done so that polo in Chile continues to grow. We just have to be patient.”

La Familia is now waiting for their next challenge, the B. Grimm Thai Polo Master, which kicks off on Thursday, January 24. Six 14-goal teams are set to compete, and this year the tournament will form part of the Royal Malaysian Polo League. “I think we are ready to start the Thai Polo Master,” says La Familia’s number 4. “We know each other well, which is importan, and we are set in terms of horses—they are in good shape after the Thai Polo Open, which is key. But the other teams also want to win, so we will see how we get on. We always play to win and we are determined to do as well as possible.”

After the B. Grimm Thai Polo Master, Matías Vial is going to be as busy as ever, as there is a possibility of stopping to play in another Asian country before heading back home to play the Chile Polo Tour, among other tournaments. “I am always trying to improve and continue learning,” he concludes. “Being a sportsman, you never finish learning. I would love to play the qualification tournament for the Argentine Open, but for that you need a big organisation in Argentina, which is very hard to set up. I am very well organised in Chile, so that is a start, but hey, you have to keep dreaming!”