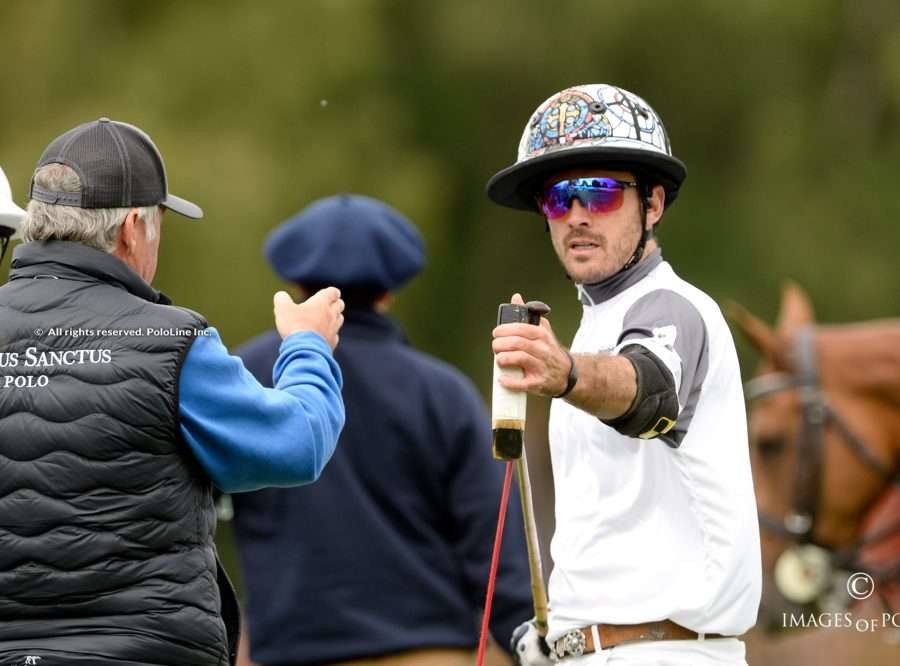 Facundo Sola has been playing the English high goal for many years now. In 2011 he won the Queen’s Cup with Talandracas, and he has been on the way up ever since. That same year, Sola, from Moldes, located in the Argentine province of Cordoba, shone in the Dubai Gold Cup Series and played exceptionally well in the Open de France. In the latter tournament, he represented Murus Sanctus; that was the French teams’s first season in the high goal, and Sola has been a key figure in Corrine Ricard’s organisation ever since. Murus Sanctus has grown hugely over the last eight years, expanding in both Argentina and England, where they are currently competing in the British Open Gold Cup after a less than satisfying performance in the Queen’s Cup.

“Murus Sanctus has progressed a lot in England,” tells Sola. “Corinne has put a lot of energy and enthusiasm into the project. She has been buying fillies at auctions in Argentina. We won’t see them play for a while, but we do have some in Argentina and others in England. The good thing is that the organisation is growing very quickly, and everyone is very motivated.”

This season Corinne decided to play both the Queen’s Cup and the Gold Cup in England. The team’s performance in the Queen’s Cup at Guards was far from what they expected it to be, despite boasting Sola’s talent and the determination and experience of Gonzalito Pieres. Once the tournament concluded, Murus Sanctus decided to make a change to the team line up, in the hopes of improving their performance in the Gold Cup. “We have been playing for about four or five years,” says Facu. “Our best year to date was the season when we played with Min Podestá and Hilario Ulloa. We only played one high goal tournament in England last year, but this year we decided to play both. We really didn’t perform as we would have liked to in the Queen’s Cup. In my opinion, it had to do with our positions in the team. I sometimes play a bit more at back, and Gonza stays in the middle, so perhaps we needed someone who played more up front. That is why we went with Min after the Queen’s Cup. Tommy Beresford is a great player, but he plays more at Back. With this new system of play—Gonza and I at Back, and Min in attack—we got off to a better start in the Gold Cup. Hopefully we can continue playing well together.”

At the young age of 29, Facundo Sola has climbed to become one of the top players in the world, but having the experience of a player like Gonzalito Pieres on the team is a significant advantage, not only for Facu, but for the organisation as a whole. “It is great that Murus Sanctus can count on a player like Gonzalito, especially because of his excellent organisation, that of Ellerstina and the whole Pieres family,” says Sola. “He is a great guy. I didn’t know him that well; it was only last year that we spent more time together, and we get on well. In the past few years I have played with very good players, and Gonza is one of the best. He helps you a lot on and off the field, he knows how to interpret the game, and he guides us constantly.”

Do you have plans once the English season comes to an end?

I don’t have anything set up for August. But I don’t want to drive myself crazy; my knee isn’t in the best shape and when I get back to Argentina I have to get it checked out and see whether I need and operation. I need to do some proper rehabilitation to make sure that I am fighting fit for September.

The Sola family is also known for their passion for horses. His mother’s farm and his father’s commitment has allowed the family to establish their own breeding  program. Ruben, Facundo’s father, is a former high goal player and an expert in breeding polo ponies. Together they have started the working on the family’s breeding program, known by the prefix ‘Cachiyuyo,’ names after Facu’s mother’s farm. “My father has done everything to set this up,” says the young player.

Sola explains that Ruben wanted to prefix program ‘La Querencia,’ after his farm, but the name was already registered. “So we went with Cachiyuyo, which we all liked a lot,” says Facu. “Rubén has been breeding for years. He puts a lot of dedication and energy into what he does, and now, thanks to his work and organisation, he is producing very good mares. I don’t know what I would do without him. Without Rubén’s work, the organisation would not be growing so quickly and evolving so well.”

Cachiyuyo mares have already begun drawing attention abroad. “I have six or seven mares in England, and they are all going very well,” continues Facu. “We are working hard to build a solid base.”

Of course, once the English season winds down, the Argentine will focus all his efforts on the upcoming Triple Crown, which he will play with Las Monjitas. In 2018, Camilo Bautista’s organisation qualified for the final of the Argentine Open after beating Ellerstina in the semifinal. Understandably, Sola is very excited about the team’s possibilities this year. “We are really looking forward to the start of the Argentine season,” he says. “We all have our jobs abroad, but the truth is that we are always thinking about the Triple Crown.”

Can we expect anything new from Las Monjitas in 2019?

We are going to continue as before, with Ruso Heguy as our coach. We will have more horses, and we are working hard to ensure that we have the best possible string. We have a great team; we proved that last year. Sapo Caset, Hilario and I are also going to play the Xtreme Polo League, with Tommy Panelo. Santi Toccalino will join the team for Tortugas. We are all very happy and are in constant communication.

Regarding the organisations achievements last year, Sola shares: “Playing the final at Palermo teaches you many things. You learn a lot by playing against a team like La Dolfina. This year we’ll have a shot at a rematch.”