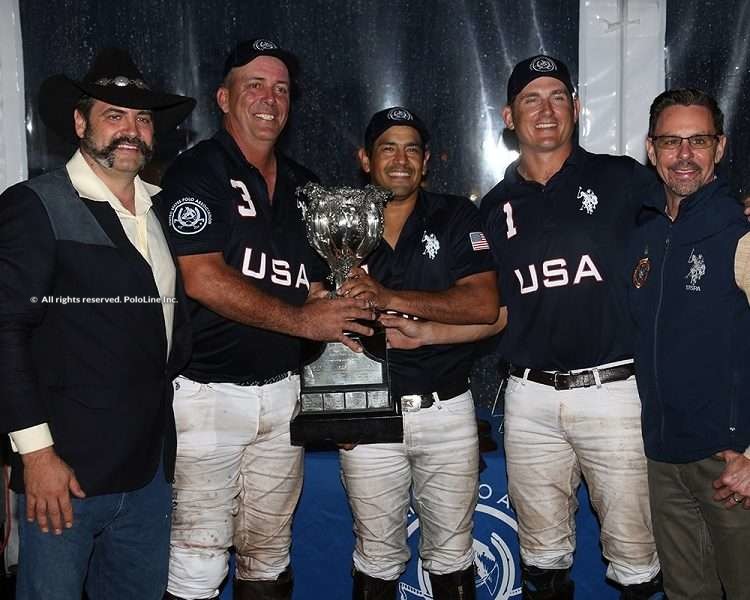 In the featured Townsend Cup, reigning champions USA dominated the game to win 15-10 over the English. Similarly, USPA I/I demonstrated grit and came out on top over Schools & Universities Polo Association Britain (SUPA) with a win decided in the second half 13-11.

Starting off the day’s events with the debut of the Churchill-Roosevelt Cup, American military members (Paul Knapp, Zach Grob, Jake Flournoy, and Joseph Meyer, coached by Mark Gillespie) defeated the United Kingdom 15-12 in a game that came down to the final chukker. Leading at halftime 9-5, USA fell behind by a goal in the third chukker, but quickly scored four goals to the U.K.’s one in the fourth to take the inaugural cup.

The Townsend Cup Remains on American Soil in 2019

Receiving two goals on handicap, England started off the scoring, but their early advantage was quickly subdued by an offensive American force. All USA players contributing to the scoreboard in the first chukker, Pelon Escapite and Biddle Jr. picked up three 2-pointers between them to make a strong statement, ending the first 7-4. Playing a wide-open style of polo, both teams were met by heavy defense in the second, Krueger guiding the ball along the wall to reach England’s goal twice. Allowing only Jonny Good a single conversion from the penalty line, USA led at halftime 9-5.

Continuing to play very well into the third, Krueger’s instincts and timing were spot on as he intercepted a backshot from the opposing team to score. Working efficiently at their positions and playing unselfish polo, USA gained two additional goals with Escapite setting up Biddle Jr. to easily make the shot. “I’ve played with Tommy a lot, so it was easy, but this was the first time I’ve played with Steve,” Escapite said. “All of us tried to do their work and nobody wanted any glory, we just wanted to win.” A single goal by Ed Banner-Eve still left England with a five-goal deficit to overcome in the fourth chukker. As the minutes ran down, England could not organize themselves fast enough to make a strong comeback. Escapite found his second goal of the day followed closely by Biddle Jr. with his third 2-point shot to seal their fate. Although Good matched the scoring in the final 30 seconds of play, his efforts fell short as England conceded to USA 15-10.

Winning the Townsend Cup for the second time beside Krueger, Biddle Jr. was proud of his team and happy with how the game turned out. “I love playing with Steve and Pelon,” Biddle Jr. said. “I played a lot with them outdoors and I played in China with Pelon. I love it because we all are fighters and we are just going to keep going for it and trying our best. I also felt like my daughter Lauren was with me today, so it was good feeling.”

USA Rises Up to Defend the International Intercollegiate Challenge Cup

Showcasing the abilities of some of the United States’ top intercollegiate athletes representing universities across the country, the seventh annual International Intercollegiate Challenge Cup resulted in a passionate fight to the finish just prior to the high-goal Townsend Cup. Making a game-changing comeback in the second half, the U.S. intercollegiate team (Fiona McBride-Luman, Demitra Hajimihalis, Christian Aycinena, Liam Lott) exhibited tremendous teamwork and shear willpower, overtaking the lead from SUPA Britain in the final chukker to recapture the win 13-11 in repeat fashion from 2018.

Unphased by the light drizzle, SUPA Britain made a powerful entrance in the first chukker with four unanswered goals off the mallet of James Glew. Although slow to start, USA began to find their footing and continually gained strength with every chukker. Striking first for the USA with an early neckshot to open the second, Liam Lott was met by an onslaught of three consecutive goals fired by powerhouse Jamie Grayson. Christian Aycinena secured a second goal for his team before the horn sounded, ending the first half 7-2 with SUPA Britain well in the lead.

Returning to the arena after halftime reenergized and focused, USA played with renewed confidence to dominate the third chukker, winning the majority of the bowl-ins. Within the first 30 seconds of play, Grayson put one between the posts, but Lott retaliated with two of his own as both sides traded goals throughout the chukker. “I think we were a lot better on defense towards the end of the game and we spread out and started shooting more often,” Lott said. “During halftime Steve Krueger gave me a rubber kitchen glove and all of a sudden I could hold the reins without them slipping out of my hand in the rain, so that was my turning point!”

Aycinena, a member of the 2018 USPA National Intercollegiate Men’s championship team Texas A&amp;M, exploded offensively with four goals to his credit including the first 2-pointer of the game. Scoring six goals to SUPA Britain’s three in the third alone, USA quickly made up for lost time, significantly closing the gap to trail by two 10-8 with one chukker remaining. On a roll and determined to hang onto the trophy for his country, Lott took advantage of the throw-in and started a series of incredible goals for USA. Tying up the scoreboard 10-all, Aycinena was followed by a beautiful play by teammate Demitra Hajimihalis who took out the man to score her first 2-pointer. Sinking yet another goal immediately after, Hajimihalis’ final goal proved enough to cement the victory 13-11.

Her first experience representing the U.S. in international competition, Hajimihalis was grateful for the unique opportunities that the I/I program has afforded. “All of the players on both teams have a lot of pride for their country. This opportunity has been incredible, the networking we’ve done, the friendships we’ve made, and the global aspect of it is a true honor and I’m very proud to be a part of the USPA’s Intercollegiate/Interscholastic program. I owe it to all to my mentors at Garrison Forest School [Owings Mills, Maryland] and Virginia Polo [Charlottesville, Virginia].”