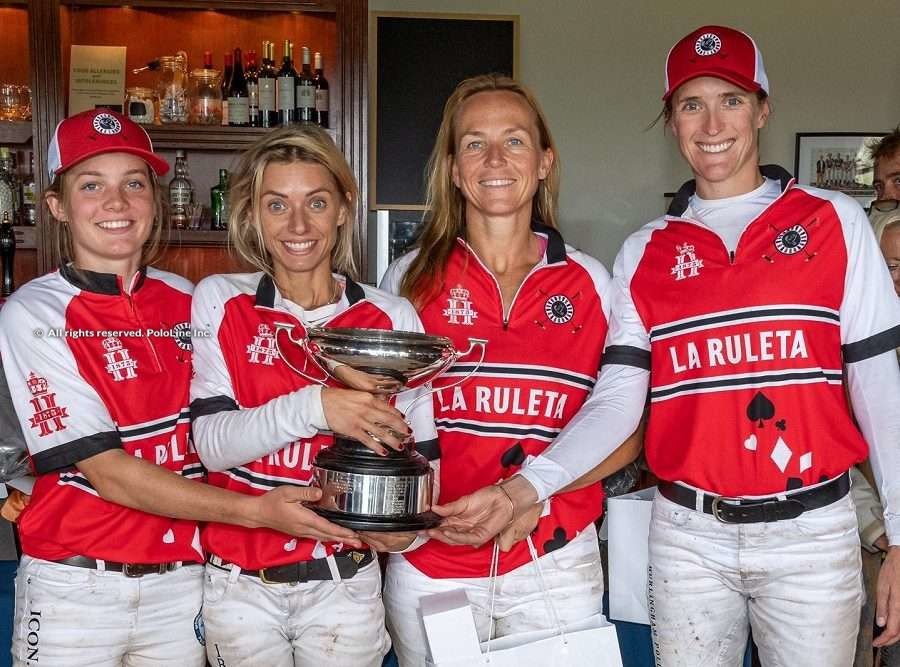 The final of the Vault Aesthetica Ladies 12-18 Goal Victrix Ludorum was played at Beaufort Polo Club on  Saturday. The match started with less than pleasant weather; yellow warnings were issued throughout the county, but despite the howling winds and torrential rain, La Ruleta and Tarantula’s ladies took to the field to battle it out for the Wood Trophy.

La Ruleta were the first to open their account against Tarantula with a goal in the first chukka. Olivia Lamphee got back on her pony to help Tarantula level the score 1-1 in the second. La Ruleta replied with a goal of their own, which was followed up with Lucy Coddington taking an impressive run to goal and leaving the finish to Clarkin making it 3-1. La Ruleta continued their streak and they were sitting comfortably 1-6 in the 3rd chukka. Tarantula found success with a hard hit to goal by Jess Andrews making it 6-2. La Ruleta were awarded a penalty, which Nina sent running along the ground to goal, but Tarantula knocked it wide.

By this point the clouds had parted and the sun shone down as Coddington made it 7-2. In the fourth, Tarantula managed to notch up a third goal but Clarkin once again chased the ball down the field, sending it to Olivia Uechtritz who neatly secured La Ruleta’s 8th goal. Despite having a mountain to climb, Tarantula dug deep and secured a team goal to bring it 4-8, then 5-8 with a penalty by Rosie Ross that was completed with a backhand by Lamphee. Unfortunately, there was not enough time to catch up and La Ruleta ran out the winners.