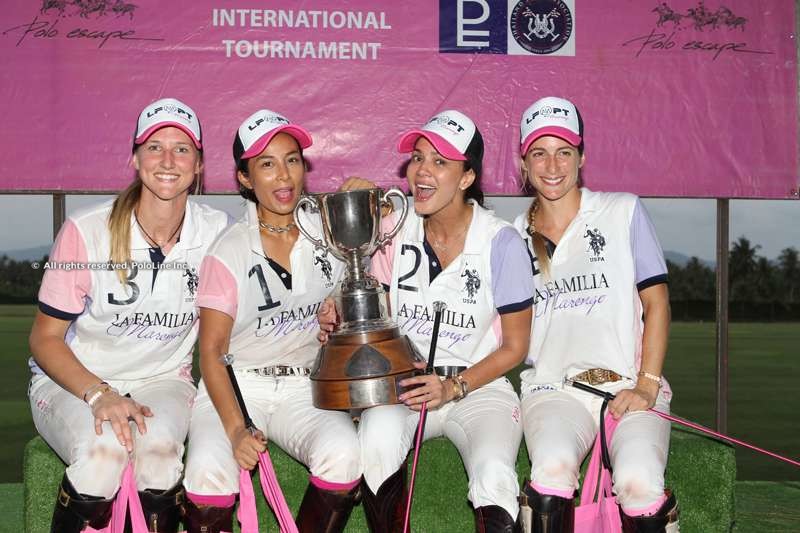 The finals of the 2019 Polo Escape Ladies International took place last weekend at Polo Escape Polo Club, in Thailand, and were very exciting and close between the three teams: Polo Escape, King Power and La Familia/Marengo.

The games had carried over from the previous day in a round-robin format. First up, were King Power vs Polo Escape, who were leading 2-0. King Power were more prepared this time and came back with vengeance. Sarah Wiseman put two goals on the board, Kayley Smith one and Clara Cassino also scored one, bringing King Power up to a 4-goal win over Polo Escape, whose number 1 player, Robin Lourvanij, had managed to converted a penalty to bring their final score to a very close 3.

La Familia/Marengo were next up against Polo Escape for their final two chukkas. Lia Salvo was unstoppable and scored 3 goals while Nana also put 1 more on the board. Polo Escape were not giving up though. Robin Lourvanij scored two goals and Alice Gipps 1; however, even with excellent play from Tiva Gross and constant man marking, it was not enough and the final score was 9-5 to La Familia/Marengo.

This left the final two chukkas between the two leading teams and it was truly spectacular. Lia Salvo set off straight to goal and scored, but Sarah Wiseman had her team working hard and there were some very exciting and fast runs by all the players. It was a battle to the end and it was a draw on 4-all, but La Familia won on overall goal difference due to their significant win earlier on over Polo Escape.

The prize presentation was followed by a delicious asado dinner, live music and dancing by the the infinity pool.