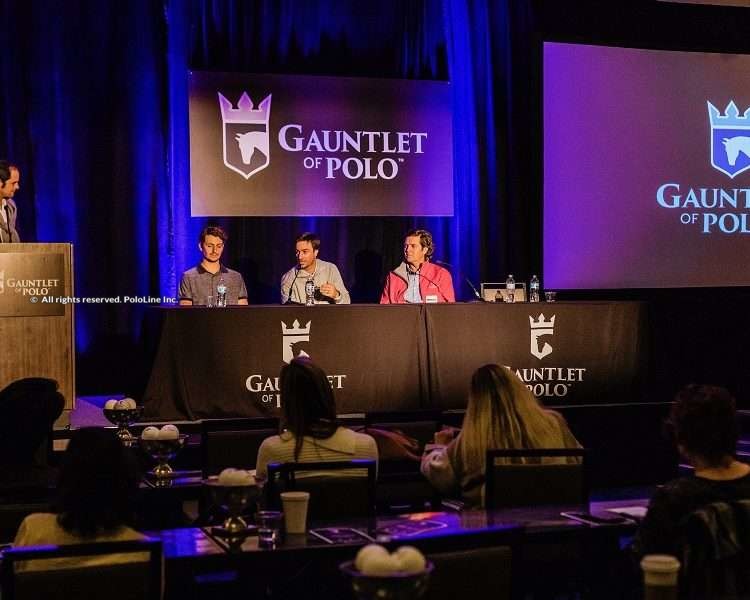 On Wednesday the United States Polo Association (USPA), USPA Global Licensing (USPAGL) and International Polo Club Palm Beach (IPC) hosted an exclusive media day, sponsored by the Palm Beach Sports Commission, to unveil the highly anticipated GAUNTLET OF POLOTM trophy. The buzz and excitement surrounding the new GAUNTLET program will provide a fresh platform for the sport of polo in Palm Beach County, one of the leading polo destinations in the United States. Starting February 13, the world’s preeminent polo teams and their world-class equestrian partners will battle head to head on the esteemed U.S. Polo Assn. field at the International Polo Club in Wellington, in what promises to be the most incredible display of athleticism in U.S. polo history as teams vie for the $1M purse.

The newly revealed trophy design incorporates three rearing polo ponies that represent the three original events of the GAUNTLET. These sculpted equestrian figures stand guard around a sleek tower supporting a GAUNTLET logo crafted out of sterling silver, and the impressive trophy will stand nearly 3 feet tall at its highest point.

“The GAUNTLET combines the three most prestigious events to create one spectacular challenge for the players to win all three. We are building the GAUNTLET into a highly visible and respected sports property,” said David Cummings, chairman of USPAGL. “We are confident that through this challenge, future generations of competitors, fans and media sponsors will recognize the sacrifice, skill and commitment it takes to be crowned the GAUNTLET Champion and have your name inscribed on this trophy.”

Members of the regional and national press heard from Bob Puetz, CEO of USPA; Mark Bellissimo, Owner of IPC; David Cummings, Chairman of USPA Global Licensing and President and CEO of Global Polo Entertainment; and George Linley, Executive Director at Palm Beach County Sports Commission, during a Q&A moderated by Michael Prince, President and CEO of USPA Global Licensing. These speakers not only provided an in-depth overview of the upcoming tournament highlights, but also shared details about its impact on the Palm Beach community and discussed how the GAUNTLET will change the trajectory of the sport and increase player participation. The GAUNTLET already brings great value to the table for players and fans alike, and will have a monumental impact on the destination’s economy, its global media exposure, future business development and continuing community engagement.

“From a player standpoint, it’s important to know that the sport is evolving,” said Bob Puetz, CEO of USPA. “The evolution of the sport will play a huge role for young polo players, who will be watching closely to see the types of competition they can aspire to join in the future and who will be motivated by the GAUNTLET’s success. The GAUNTLET OF POLO is going to elevate and test all of the participating teams and the players are going to test themselves, and they are all eager to accept the GAUNTLET’s challenge.”

This thrilling high-stakes event will span three months at the U.S. Polo Assn. field at Wellington’s IPC. Internationally acclaimed polo stars such as Jared Zenni, Luis Escobar and Agustin Merlos, who were on hand for the media event, acknowledged that they have been strategizing for months and pre-planning the coordination of the polo horses and the team. The players in attendance shared that they are thrilled to compete for the coveted C.V. Whitney Cup and USPA Gold Cup, as well as the lauded U.S. Open Polo Championship. If a team wins all three tournaments, the will be crowned GAUNTLET Champion in a winner-take-all format, bringing home the largest prize purse in polo history.

The GAUNTLET is expected to draw tens of thousands of fans from around the world to the Palm Beach community and surrounding areas from February through April. Each tournament will be livestreamed on USPA Polo Network each week, and the final match will be viewed by millions of people on CBS Sports on April 28 at 2 p.m. EDT. The final match will also be re-aired globally in Latin America, Europe, Asia and India.

Tickets for all GAUNTLET OF POLO events are available for purchase at www.internationalpoloclub.com.

The USPA have announced the High-Goal Committee for 2019 after the election. It be comprised of the following individuals:

Please contact highgoal@uspolo.org with questions or concerns you would like discussed by the High-Goal Committee. The committee is looking forward to an exciting year!