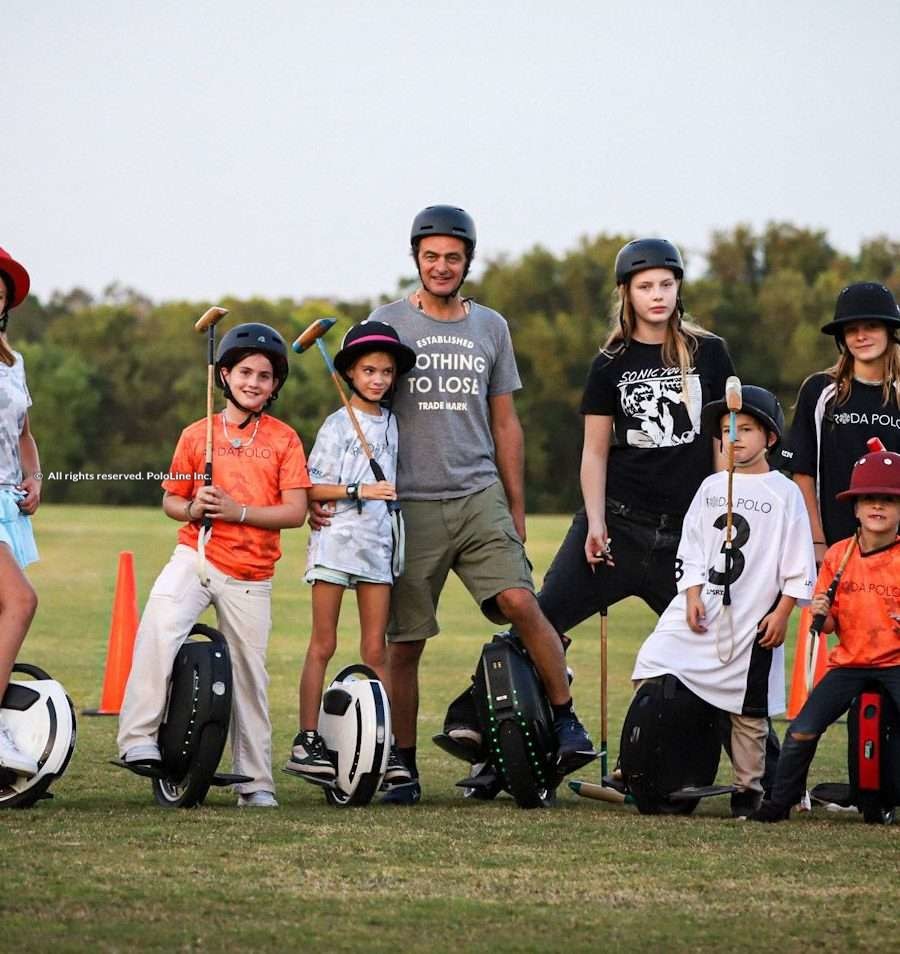 Javier Tanoira carries one of the most remarkable names in polo – he is the son of the extraordinary Gonzalo Tanoira, the legendary 10-goaler who was a member of Mar del Plata, in the days of the historical clashes between Coronel Suarez and Santa Ana, and years later, he was appointed as President of the Argentine Association of Polo. But far and beyond, Javier, a former player of the Triple Crown as well, is a very curious and restless man, who has always contributed with great ideas in order to improve a sport he is very fond of and he’s grown with.

His latest creation was born in 2019 – Roda Polo. The idea was to develop a sport similar to polo, only that horses have been replaced by an e-wheel. When he created roda polo, Javier took inspiration by watching the high goal players’ kids doing stick-and-ball on bicycles. What is roda polo, then? It consists of an e-wheel, an electric unicyle with a maximum speed of 50km per hour. These unicyles are featured in three types, depending on age, level and budget. Kids (and adults, as well) are able to show their skills on the e-wheel while tapping the ball around the polo field, protected by all the safety measures – helmets, boots, knee and elbow pads, and googles.  Roda polo has gained more and more popular all over the world; and so popular is has become that today roda polo has recently been granted with a polo club in Palm Beach, that it is exclusively to play roda polo during the whole of the current season in the US.

“We were looking forward to going to the United States for quite a while. Finally, we got a call from the United States Polo Association (USPA) in November, and they requested a proposal with the aim to organise roda polo in Wellington”, Javier Tanoira told PoloLine. And he adds: “I went to the World Polo Championship and following some meetings, we were able to be granted a club with fields to play roda polo exclusively. We are very happy with this project, which we call the first roda polo club in United States; it gives us stability, as well, because we used to play in different places, which obliged us to decide whether to go”.

What can you tell us about the club and the owner?

The club is called Polo West and it is owned by a great friend of mine, Scott Swedlin who also owns the biggest horse clinic within the area, Palm Beach Equine Clinic. Thanks to Scott, we have this place for everybody who want to join and play. Wellington is really great, because it is “the” place of winter polo in the United States, not only because all the players are settled here, but also because Wellingon has been a pioneer of roda polo. Poroto Cambiaso, among others, started to play in Wellington. Also, there are a lot of people who support us and we will take good advantage of it. We have the club, but we will go whenever we’re asked to go as well, to do exhibitions. In addition, we’re going to launch a roda polo academy, which will have e-wheels to loan in order to take group or individual lessons, play matches or exhibitions.

With regards to the United States, and with a club settled to play roda polo exclusively, the idea is to attract as much people as possible, with the aim “to get people see it and then take roda polo to their clubs in the North – New York, Virginia, Texaas, Kentucky; roda polo is also established in the West, in Califormia. So, the sport is slowly spreading everywhere and we are very happy with it”, says an enthusiastic Javier.

Roda polo exhibitions have taken place in some of the most signficant tournaments of the world – Sotogrande, England, the Argentine Open, among others. This means that, beyond having a club settled in Wellington, during the current American season, Javier remarks that “in the last three months, we accomplished the goal to take roda polo to other countries – countries such as Mexico, Germany, The Netherlands, Luxembourg, Belgium, Spain, England and France have all bought the e-wheels”. And he concules: “People see roda polo as a possibility as an open door to approach to polo”.