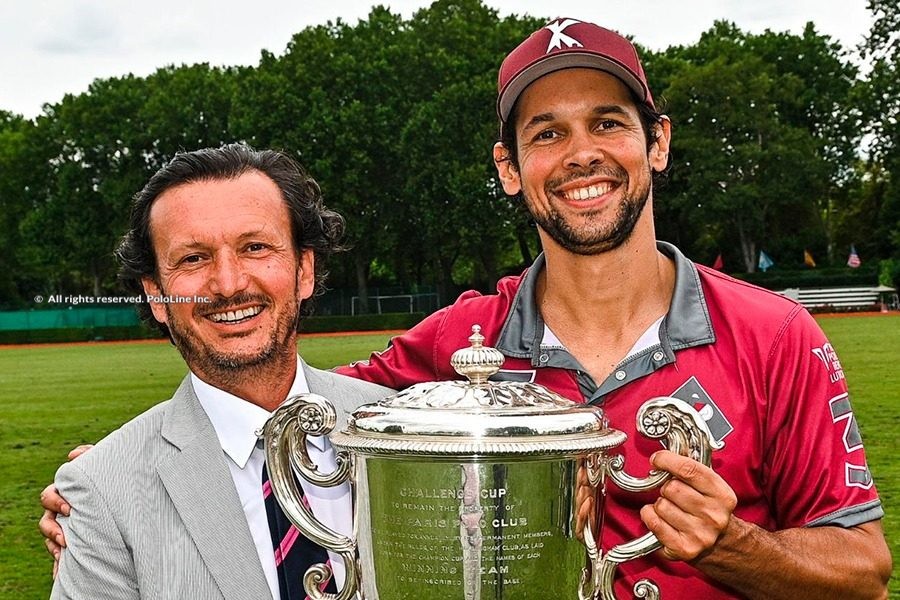 After five years, Patrick Paillol, one of the best polo players in France, had the joy of winning one of the most prestigious polo titles in his country: the Open de Paris. He won the title representing Kazak, the organisation he has been playing with for more than ten years. This time, he claimed the win alongside Santiago Irastorza, and Ferrari brothers, Tomás and Martin. The latter had the difficult challenge of filling in for Sébastien Aguettant, Kazak’s captain, the heart and soul of the team, who unfortunately sustained an injury in the first match of the season and was forced out for the remainder of the French Triple Crown.

“I’ve been playing with Sébastien for ten years, and we share the same goal, which is to form a big, competitive organisation, and build a structure with professionals and grooms, where everybody wants to be a part of it,” says Paillol, the 5-goal French player. “We put the team together with Pandi (Irastorza), who is a very good person, one you can trust; a very good friend on and off the field, and it is a real pleasure playing with him. When Sébastien got injured in the first match of the season, the first choice was Tomi’s brother, Martín, who’s only 15-years-old, and who should have been named MVP in the final, I think.”

“In terms of horses, we’ve been buying some really great mares in the last couple of years, thanks to Pandi, who works in Ellerstina, and thanks to Gonzalo Pieres, with whom we have a great relationship,” continues Paillol. “So we are able to have some very good mares to compete on a high level.”

Having won the Open de Paris was not the only remarkable achievement for Kazak – that was the icing on the cake of  an unforgettable season for them. “It’s been a pleasure to win the Triple Crown of Paris, and against Sainte Mesme, a huge organisation and who have won several tournaments in Paris throughout their history,” says Paillol. “Robert (Strom) is a very close friend of mine, we’ve known each other for many years and we have the same goal: to win and be competitive. Kazak and Sainte Mesme are very close friends off the field, and fierce rivals on the field, because we both want to win, but always in the best of terms. I want to thank Robert for keeping the team together while Corchito was still in hospital, it was very moving to play against him. And the most important thing is that Corchito is coming back, so we are very happy to see him in Sainte Mesme again soon.”

The setting where polo is played in Paris, is undoubtedly, one of the most glamorous and historic in the polo world. Polo de Paris, or simply, Bagatelle, hosted the 1924 Olympic Games, and polo was among the sports involved. That’s why it is very special for any player to play on those grounds. On this issue, Paillol shares: “Playing in Bagatelle is always very moving for me, because Bagatelle is such a special location; there are not many places that have the soul and the history Bagatelle has; in fact, the Open de Paris celebrated its 128th edition. It is a closed place, and it brigs a lot of pressure, because of the history, and the way it makes you feel. We won the Open with Clemente [Delfosse] in 2019, with Kazak-Outsiders, and it is so very good to have won it now with the name Kazak alone. It is such a remarkable achievement for us.”

Clément Delfosse is one of the best players in France and, is, like Patrick, rated at 5-goals. “We are close friends, as I also am close to his brother Matthieu,” says Paillol. “Perhaps I am closest to Clemente because we have the same age, and I’ve always seen Matthieu as the eldest brother. We have a lot in common with Clemente, he is such a great friend and, I tell you, it is very difficult to have such a great friend in polo. I won the Open de Paris with both of them: with Matthieu in 2015 and with Clemente in 2017. And we are thankful to Sébastien, who gave the three of us the opportunity to play medium goal in Sotogrande, where we had a lot of fun. I guess we will play together again sometime.”

Kazak, an organisation based close in Sainte Mesme and La Magdeleine, 45 minutes south of Paris, has a very promising future ahead. In addition to what’s coming – playing at La Moinerie and then in Saint Tropez – Sébastian Aguettant and Patrick Paillol already have their sights set on their next major goals. “We played the Open de France last September, with Jero del Carril and Segundo Amadori, and that’s the tournament we want to win,” says Paillol. “Last year, we lost the final to our neighbours, La Magdeleine. So we look forward to working with Sébastien in the future, because we share our passion for polo, and thanks to him we are able to have such a big organisation. We are big friends, and we are working to put a team together to play high goal in England next year. We will have to wait and see, but we already have it in mind.”

Last but not least, Paillol spoke about the developing and growth of polo all over France, the expectations for the future, as well as the institutional aspects of it. “I speak with Jean-Edouard Mazery, the President of the FFPolo, a lot,” he remarks. “I think polo in France is becoming more and more competitive: there were seven very good teams playing the Open de Paris, fourteen in the Rider Cup and sixteen are expected to play the Open de France. We have to take advantage of all this polo in France, because it is good for everybody: for the French and for people abroad who are coming back to play in France. It means we are doing things very well in terms of clubs, organisations, and we are competitive. Polo was rated very low in France, between 6 and 10 goals; but the growth of high polo contributed to make it better. That’s why many big organisations who play in England are coming back to play in France again; it’s great news, because they put pressure on other teams to be well organised and well mounted, and to be as competitive as possible.”