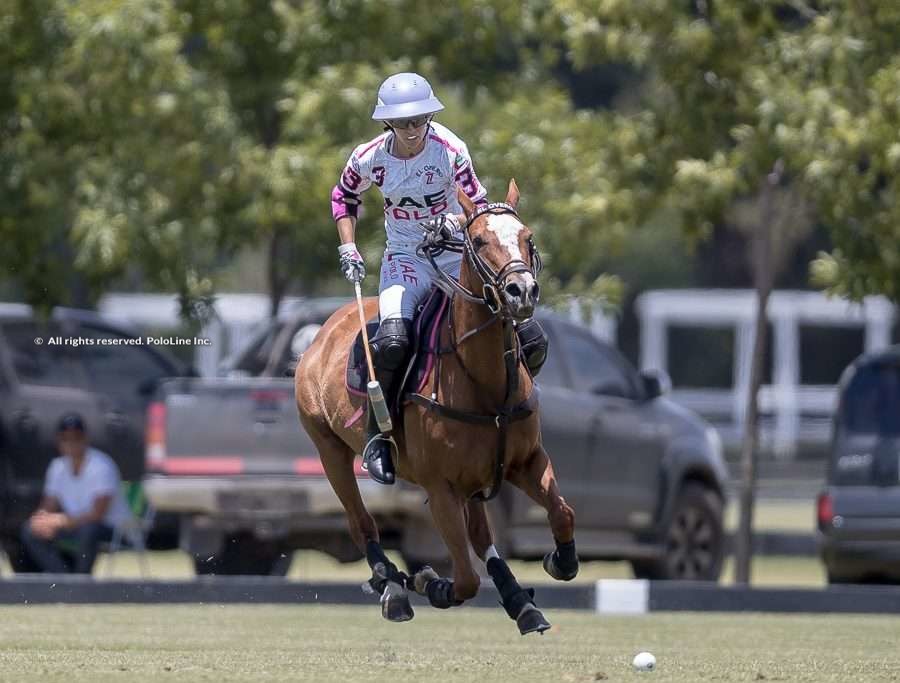 “Traffic is important for the horses, training alongside each other”

Hazel Jackson-Gaona is one of the most important representatives of the competitive female polo circuit. The talented British player is the second woman to have reached 10-goals (the first being Nina Clarkin), and last December she won the Argentine Women’s Open Championship alongside El Overo Z7 UAE, following a spectacular final in Palermo against La Dolfina Brava.

Hazel, who also leads the women’s ranking of the World Polo Tour, got on the line with PoloLine to discuss horses.

Can you describe your ideal polo horse?

Agile, light mouth, one which takes me (forward going), and most importantly, a horse which wins the play.

What do you think is the most important characteristic for a polo horse?

Heart. Those horses which will go the extra mile to win a ride-off or win the position on the field is so important to me, you are basically invincible if you have the position won. With some horses, this comes naturally.

What is your ideal number of horses for a string?

Depends on how many chukkas. For England, four chukkas equals six horses, four playing with two spares. In Argentina, where it is six chukkas in the mixed, I think eight horses is an ideal number to share the work load. I never usually play more than five minutes on a horse if I can avoid it. However, if it comes to an important final, I am happy to bring back my best two.

On average, how many new horses should you have coming into your string each season?

Haha, good question! I only own 5 horses in the UK and in Argentina. I am aiming on upgrading my string each year, that’s why I think it is important for us female pros to be charging the right amount in order to re-invest into our strings. Women’s polo is so competitive these days. There are so many girls who are seriously well mounted.

I must say I have been so lucky over my career to have help with horses, especially at the moment with UAE, El Overo Z7, between Sheikha Maitha and Lucas Monteverde. I feel they have one of the top breeding programmes, it fascinates me. I had never ridden such talented horses until I started working with them, it opened my eyes to a whole new world. Without some sort of organisation behind me, I think it is very difficult to be well mounted.

What is the most important stage in the training of a polo horse?

I think in general it is very important not to rush the training, and patience is key. There are so many key points during the training. However, I think training the horses on a comfortable surface is vital so they really learn how to use their back legs, and manage to corner like a motorbike, with confidence. I also think ‘traffic’ is important for the horses from a young age, training the horses alongside each other, so they are not afraid of other horses coming towards them. We start that from a young age at El Overo Z7, the horses are so comfortable with others around them, it makes life much easier for all the pilots.

Which is or has been your favourite horse and why?

That has to be a tough one, nearly impossible to choose just one. I can narrow it down to 3 plus 2 to look out for…

1) Milly. One of Sheikha Maitha’s horses, little black stunning horse with plenty of attitude, the most agile thing I have ever ridden, she got BPP in Dubai with Alejandro Muzzio last year in the 18 goal. I think this horse has the ability to make any player play 2 goals above their handicap. I think if you asked Lukin Monterverde he would say the same.

2) Repetida. Another El Overo Z7 horse I played in the Women’s Open in 2018. I will never forget the power, strength and completeness of this animal! She is the definition of a winner on the field.

3) Kila. She was previously owned by Spencer McCarthy, she is the oldest, soundest horse in my string, she always performs the same no matter the field, which is a luxury. She is the definition of class.

Keep an eye out for El Overo Z7 El Pitohue and Porron in Argentina, two geldings who give everything on the field. I feel super blessed to have played these two last year in the 2019 Argentine Open, both are phenomenal horses.

Which is the best polo horse you have seen play and why?

I love the look of Chequera from Facu Pieres and Guillermina from his brother, Nico. They are on a different level in my eyes. Dreamy!

Is there any horse you saw play that you would like to try?

Oooooh plenty… Who would not want to try a Cuartetera?