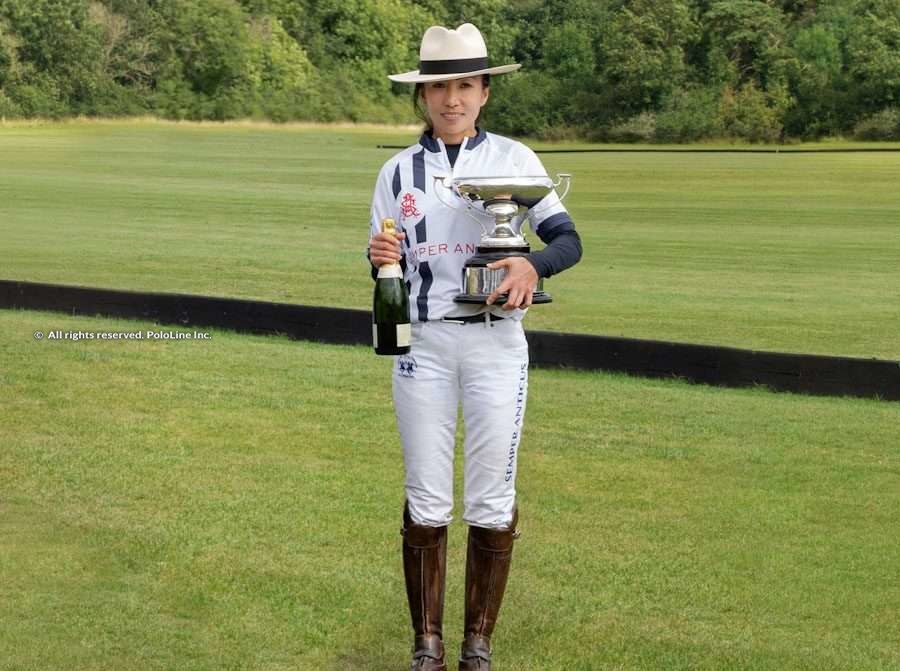 “Polo is refreshingly non-sexist and a great equaliser: It’s a sport that men and women can play together”

The most recent polo season in England welcomes a fresh, new female patron on the scene. Clarinda Tija-Dharmadi launched the Semper Anticus polo team at Cirencester Park and went from zero to high goal that same season. She spoke to PoloLine from her home in Singapore. “I used to do dressage and show jumping,” shares Tija-Dharmadi. “But my two sons discovered polo horses. Actually, I picked the mallet up relatively late but it was all because of my boys, who are beyond crazy about the sport. It’s never too late – polo is a lot more accesible than most people think it is. In Argentina, kids start playing at a very young age, but in Singapore and Indonesia we seem to get started comparatively late.”

What does polo mean for you?

“Well, polo makes my soul rise and run.  It is a rare combination of grace, beauty, spirt and freedom; it’s emotion and ageless. There is so much to love about the sport – the passion, the people, the horses, the competitiveness. Another reason I love equestrian sports is that I still see people over sixty riding and playing polo! It’s competitive for all ages.

I feel very strongly about the Semper Anticus organisation being an incubator or platform, if you will, for young talent to give them opportunities to play.  The teams I ran this season included Dom Lodge, Jack Aldridge, Oliver Conway-Johnson and Juana Lavinia, and I loved playing with each of them.”

Clarinda had a very successful season. While she is currently based in Singapore, her polo team is based in England. Throughout the season she played at Cirencester. “Cirencester is warm and welcoming, and feels like an extended family,” she says. “The best thing for me was seeing my children ignited by polo amidst the pros and patrons who live and breathe polo during the season.  It’s the perfect place to have my children grow with their polo – the other patrons, pros and pony clubs in the area make it really fun and vibrant for children’s polo. I’ve also played at Guards and Cowdray, but Cirencester is ideal to have as the home of Semper Anticus; it is a beautiful parkland environment, a bucolic place. It is the countryside in England, yet its locality is perfect to all surrounding clubs including those in Berkshire, and for my family, the best thing. Of course I play in Singapore, but my organisation and team home is England, because Singapore is more limited with regards to polo. Much as I would love to grow polo in Singapore, given the restrictions, the only real options to grow the Semper Anticus organisation, with the support and infrastructure we need, are UK and Argentina.”

Clarinda’s sons, who are 11 and 10, “love Barto and Jeta Castagnola. The eldest idolises Barto and the youngest is a die-hard Jeta fan. Indeed, both Castagnola boys are brilliant and amazing, and I enjoy seeing them play together. In fact, we played a challenge match with Barto and Jeta – it was quite something for me to play with both brothers, with 21 goals behind me! – and after that they took my boys to stick and ball. My sons worship them. To say they are big, big fans is an understatement. And I also love the whole Castagnola family. Camilla Castagnola is an inspiration as a mother; both Lolo and Camilla have done a fantastic job raising such talented, yet kind, humble and down-to-earth children.”

Will you be travelling to Argentina soon?

“I really want to go to play in Argentina! It’s a dream and we have exciting plans for Argentina next season. I am very enthusiastic about the idea of playing in Argentina, because in addition to England, it is the mecca of polo, and another place where my sons can be immersed in polo to live, learn, laugh and improve their polo skills. There’s a lot of talent in Argentina; its a place where I will be able to see my children dazzled beyond bliss watching those great polo icons. My children tell me all the time – ‘Mummy, I want to to go to Argentina, play polo and see what’s going on there!’ They’ve also announced that they want to drop French and Chinese, and study Spanish instead, so that they can speak to the Argentine pros and grooms!

Also, my goal in Argentina is to do more training and improve for the next UK season; we have even more exciting plans for the team next season. And of course, Argentina is the best place to buy polo ponies. I have already shipped ponies to Singapore and UK from Argentina. I’ve invested in many very good horses in the UK because I am very committed  to building a very strong string of ponies as we focus more heavily on medium and high goal there.”

During the last season in England, Clarinda won seven tournaments, including the Cirencester Ladies 18-goal, one of the most important women’s tournaments of the British circuit, with her team, Semper Anticus, alongside 10-goaler Hazel Jackson, Juana María Lavinia and Lucy Coddington. “Hazel opened my eyes to women’s polo, she is amazing, an inspiration both as a player and as a woman, a true professional, always searching for new talents and very keen on empowering women in polo,” says Clarinda. “She showed me how great it is, and inspired me to believe that a woman can do it, too.”

The Cirencester Ladies 18-goal was the only women’s tournament Clarinda played. “One of the greatest things about equestrian sports, polo for example, is that the horse is a great equaliser, and polo is a sport where men and women can compete playing in the same teams,” she says. “The ladies league is a lot of fun, too.”

What’s the story behind the name of your organisation, Semper Anticus? It reminds us of the Roman Empire!

“Well, polo is a passion, like the classics, whether its literature, music, history, dance. And many of the European civilisations started with the Roman Empire. Semper Anticus means ‘Always Forward’.

Many people have contributed to the successful launch of my team. All of them are valuable to me. I have to say polo is like a big family, kind, lovely, helpful, generous, not just to me but also to my sons. My players have become like an extended family for me, taking my sons under their wing, playing practice chukkas with them, prepping them for the rules test, playing with them in the club 0-goal, hanging out by the field, pony lines and lorries with them, nurturing them and bringing polo alive for them. They’ve given so much, that I want to give them the same support and the same encouragement. Everybody in the team has worked so well together. They all brought their very best to each match and played valiantly, from 0 to 10 goalers. They play their hearts out for me and I am immensely grateful to all of them.”

Do you have a favourite player?

“Well, it’s impossibly difficult to say who is my favourite player. If pressed, I’d have to go with Johnny Coddington because he was my anchor alongside me in my first tournaments, instilling in me the confidence to move to higher goal polo, and in the process teaching me so much on and off the field.  Also Lolo, Barto and Jeta Castagnola – who make dreams come true.  And Adolfo Cambiaso is much respected as the legend that he is. Of course Hazel, because she opened my eyes to women’s polo, she showed me how great it is, and together with Nina Clarkin, inspired me that a woman can do it, too. That’s incredibly special.”