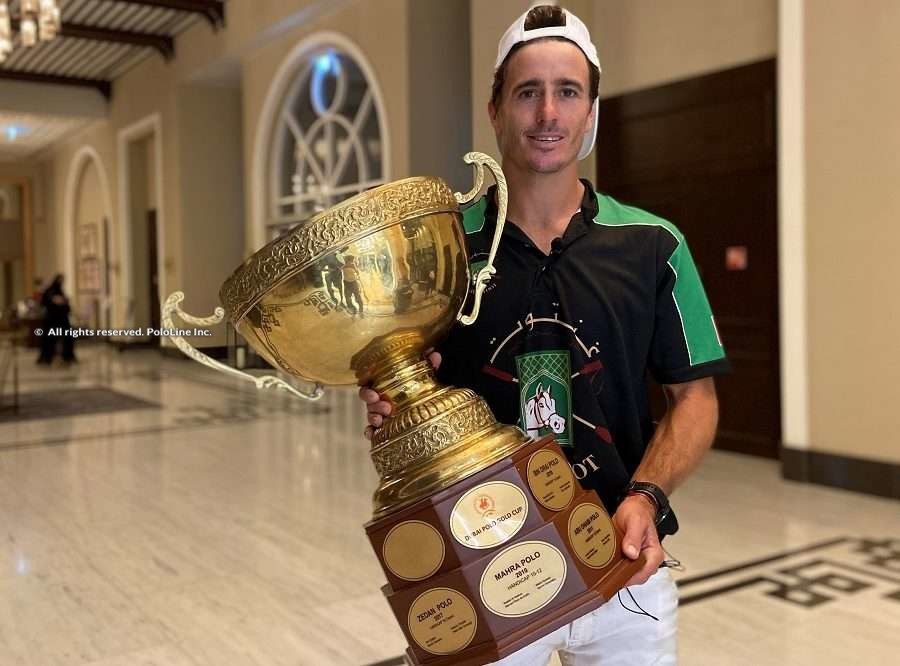 Last Friday, Ghantoot won the IFZA Gold Cup, the most prestigious polo tournament of the Middle East and Asia. And not only the champions but the great champions, by sweeping all their contenders by large score difference and remaining undefeated. And within the organisation, Pablo Llorente was a crucial man, a powerful scorer who produced no less than 18 goals for this team in addition to an spectacular performance. Without doubts, he was one of the best players of the tournament.

“It’s nice to know how much the Gold Cup weights and be able to lift it”, he said to PoloLine after winning this competition for the first time in his career.

And added: “I am very happy, this is such a great team. The three of us – Marcos Araya and César Crespo – get along great, as well as with (Nasser Al) Shamsi, we do understand each other very vell on and off the field; maybe more off the field, we spend the whole day having fun, and that makes things easier. Last year, it was a bit bitter for us because we couldn’t be able to continue with this team for the Gold Cup; but we were lucky enough to make it this year”.

When it comes to speak about Ghantoot’s remarkable performance thoroghout the tournament, the 30-years-old Argentinian says: “Fortunately, we were able to play well the whole tournament, the team and the horses worked very well. We earned confidence slowly – on the team, the horses, ourselves. The first chukka was a bit hard; I think we didn’t things as good as we use to do, I mean, we didn’t put enough strenghth and weren’t not that focused on our aim, which was to win. But as the game went by, we put all the pieces together and we played well”.

Halfway in the third chukka, Pablito, who also won the 2020 Dubai Silver Cup, suffered a heavy fall, that scared all those who were watching the game, and mostly himself, as he explains: “I was scared to say the truth, it was really bad. I wasn’t aware of it and I had a bad fall; I didn’t have time to react and jump off the horse quickly. Fortunately, there were no consequences and I was able to continue playing. I felt a bit sick at first, but I could do it”.

Pablito Llorente’s next step is the EMAAR Polo Cup, at Dubai Polo & Equestrian Club. Next up, they will go for the team’s big aim of the season – the HH President of the UAE Polo Cup, where they will be locals. But that’s another story. At the time, it’s only celebrations.