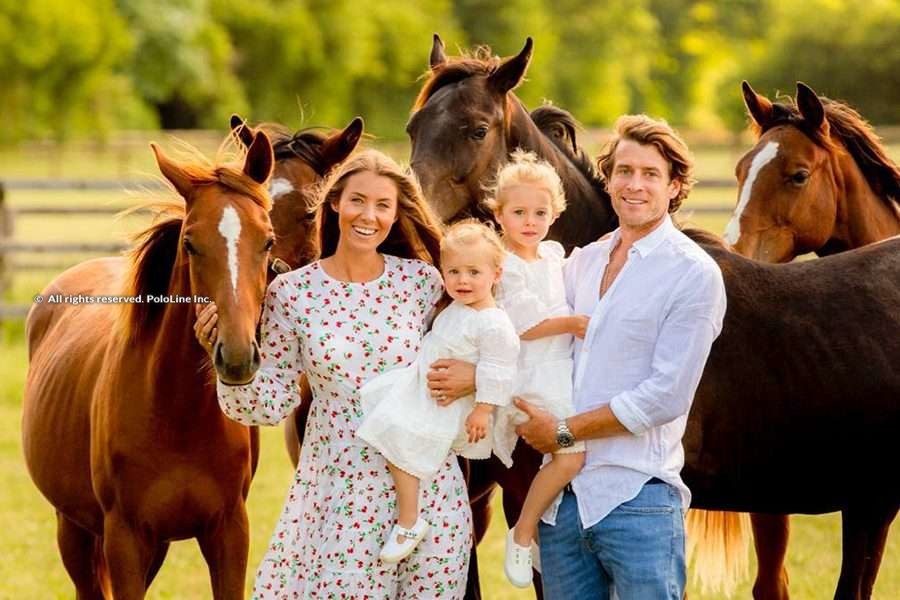 Since the Lovelocks breed began back in 2010, the Hanbury family have been continuously expanding in the world of polo breeding. After several years of hard work and dedication, they are reaping the rewards and making their dream come true, not only by providing high quality horses to the best polo players and organisations around the world, but also earning many prizes. Perhaps the most significant achievement for the Lovelocks breed and the Hanbury family so far is the success of the remarkable Lovelocks Camusericht, a mare that combines the unique bloodlines of La Dolfina and Ellerstina (Open El padrino x Dolfina Querencia). Lovelocks Camusericht was ridden by Adolfo Cambiaso and proved to be an extraordinary horse, winning all the BPP awards at International Polo Club Palm Beach.

With the English season just around the corner, Charlie Hanbury, the heart of the Lovelocks breed spoke to PoloLine about family pride, the joy of success and achievements after years of hard work, and what’s to come.

How is the Lovelocks breed developing and growing currently?

Lovelocks is in a great place at the moment. Having started in Argentina in 2010,  we are now enjoying some incredible results. We have horses playing all over the world with the best players and winning prizes as well. It’s a great sense of achievement and hopefully it will continue!

What services does Lovelocks provide?

We currently have some stallions available to use in England for the first time. They are standing at Equibreed UK. We have Lovelocks Chekhov (Open El Padrino x Grappa Kurni). He is an incredibly good looking stallion that combines the best genetics from Ellerstina. He is currently playing with me in England.

Then, we have Open El Padrino (Sportivo x Illusion), possibly the most popular upcoming stallion in the world at the moment. He has had numerous offspring playing in the 2020 Triple Crown, as well as in England and America. He is the Sire of Lovelocks Camusericht, a mare that has won all the BPP prizes in America this year with Adolfo. We also have Lovelocks Bon Jovi (Atlantic x Paprika), a stallion I have played in England since 2013, I now also play some of his offspring in the same games as him.

What can you tell us about Lovelocks Camusericht, the best horse of the US polo season?

Lovelocks Camusericht is a mare that we sold in our auction in Pilar in 2015 to La Dolfina. She combines the bloodlines of La Dolfina and Ellerstina. She is out of a mare called Dolfina Querencia, a mare we bought from La Dolfina, and by Open El Padrino, a stallion we bought from Ellerstina.

She is an incredibly good looking mare and has already achieved so much at such a young age, she has a very big future ahead of her. I can’t wait to see her in The Triple Crown later this year.

What did you feel seeing her getting such a large number of awards in the US Open?

For my family and I it was an incredible sense of pride. When we started breeding, our dream was always to see the horses played by the best players on the biggest stages. To see the best player in the world winning tournaments and prizes on a mare that we bred is honestly a dream come true.

Did you imagine that Lovelocks would become so big when you started?

When we started, the idea was to be able to mount ourselves to be able to play at the highest level, the next step was to get the best players in the world on our horses. We have now sold Lovelocks products to over 18 countries around the world. We hope to be able to see our genetics winning prizes globally more and more.

Who are the breeders Lovelocks are most involved with?

When we started in Argentina in 2010, we invested heavily in the best bloodlines from around the world, England, Australia, and Argentina. We have then combined them and had some great success. Breeding is not something that delivers quick results and it has taken us 10 years to get to where we are now in Argentina. I think we are in a great place and our time and work is starting to yield its rewards. I am sure we will see many more Lovelocks products on the big stage soon.

In Argentina we have around 20 in each year group. In England we do less, but it averages between 5-10 a year group. We have some really nice ones coming through the system now.

Yes, in Argentina we have had some great success with our teams playing the younger horses. It’s a good introduction to polo for them. The teams are made solely for the horses to play some competitive polo and improve but they have had some great results and it is always good to see our team and horses playing, especially in Palermo!

Which teams and players will be playing Lovelocks horses in the UK season?

We have some nice ones to look out for this year. One I am very excited to see is Lovelocks Drogba (Open El Padrino x Fina Chelsea). She is playing with Barto Castagnola and I think will then go to Argentina for the Triple Crown. To name a few others, Pelon Stirling has a nice one, Lovelocks Fresh Air, Lovelocks Illusive is with Park Place, Lovelocks Megatron with Felipe Dabas and Jeta Castagnola has a couple.

There will be around 15 playing the UK high goal, and I hope to add a few more during the Queen’s Cup.

What are your plans for the next UK season? Will you be playing?

Yes, absolutely! This season I am fully mounted on Lovelocks horses. I will be playing all the medium goal at Guards and Cowdray. Lovelocks may also put a team in the Warwickshire Cup, at Cirencester, but we haven’t confirmed anything yet.