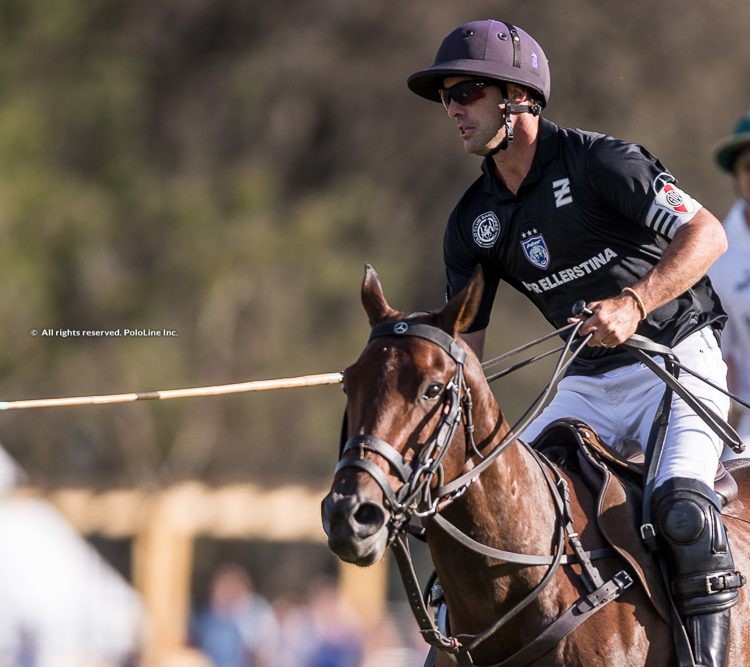 The debut victory in the Ylvisaker Cup against Tonkawa on Saturday means that Facundo Pieres and Pilot have started the season on the right foot, beginning as they mean to go on: winning.

“We chose to play the Ylvisaker because I think that it helps to play a 20-goal tournament before starting the 22-goal,” shares Facundo Pieres from Wellington. “It is good to go into it with a bit of rhythm established. I think it is particularly good for the horses, and for players like Colo [Matías] González and Curtis [Pilot], so that they can get into the swing of things before the 22-goal. Obviously, if we were short of horses, we wouldn’t be doing this. But luckily we are well mounted and we have a lot of new horses that need to be played to see how they go.”

“We are excited to start playing,” he continues. “After being on holiday for a couple of weeks I was ready to get back to competing and playing; I wanted that adrenaline of having to win, of the pressure.”

Beyond Pilot’s participation in the Ylvisaker Cup, the team’s main objective is the new Gauntlet of Polo Series, composed of the traditional US Triple Crown tournaments. At 22-goals, the series is the highest rated USPA competition.

“Our expectations this year are high,” tells the Ellerstina player. “There are several good teams playing this season, and many have the chance to win, but I think we have a competitive team. It is too early to say whether we have a good team or not, we will realise that as the tournaments progress. Our success will depend on how Colo González plays; Gonzalito and I have played together many times before and we know our strengths and our weaknesses. The organisation is very good and we have great horses, so that will help the team performance.”

-How is Curtis Pilot preparing for his second high goal season in the States?

“He is very involved with the polo. It is a nice challenge for us, and it will be a lot of fun, because he really loves horses and that means that he loves playing polo. He likes going to the stables, he likes spending time with us, playing practices, talking about horses, and so on. We have a great time with him. We played together last year, so this will be our second season. I think he has a lot of polo in him.”

In September 2017 the USPA officially announced that which had been rumoured to be true for a while: that the 26-goal series would be lowered to 22-goals. While many were not in favour of the decision, the fact is that the response has been positive, both concerning the number of teams that have registered to play the season and the quality of players taking part. “I think that it was a good decision by the Americans because there were obviously several teams wanting to play if the level was put down a bit,” continues Pieres. “And that is exactly what happened. Many teams playing the 20-goal took the step up towards the 22-goal. There are also a few teams, like Las Monjitas, who came back after time away. I think it was a good move by the USPA.”

Not only are we expecting a great season because of the sixteen teams set to play the American Triple Crown, but also because of the eight others that will play the 26-goal World Polo League Series, organised by Grand Champions and Valiente. “I think that this could be one of the best seasons in the US,” explains Facundo. “When I started coming here, years ago, there was always a high number of teams competing, from 16 to 20. There are many competitive teams here, so I think it will be a very even season. I think it is a great idea to give the winners of each tournament a prize; it is a nice incentive,” says Facundo, referring to the cash prize of 125,000 dollars that will be gifted to the winning team of the CV Whitney Cup, as well as to the winning team of the USPA Gold Cup, and 250,000 to the US Open champion. If one team should take the Triple Crown, the Association will reward them with one million dollars.

After the intense US Open final played last year—where Daily Racing Form defeated Valiente, which boasted both Adolfo Cambiaso and Facundo Pieres—this edition promises to be as competitive as ever. “The US Open has always been one of the most important tournaments in the world,” states Facundo. “But now that there will be sixteen teams competing, it is obviously going to be more difficult than ever. It could be one of the best tournaments of the year.”

How do you view your chances?

“We have done everything possible before the season in terms of organisation, horses, getting the right people together, grooms, vets, riders—everything. Now we just need to play and see how we get on. It is hard to tell what chances you have of winning before you start playing. We are on the right track, and with our organisation and our horses we have a shot at winning. We just have to see how high our chances are.”

Facundo and Gonzalito are fully focused on the American high goal, and the reality is that they are used to qualifying for the final of practically every tournament they play. What went down in Argentina, then, when they lost the semifinals of the Argentine Open to Las Monjitas, is not easily forgotten. “My reading of Ellerstina’s season is a tough one, because we didn’t make the final of the Open, and we didn’t give ourselves the chance of taking the title, which was our goal,” says Pieres. “But I think Ellerstina, as a team, made a great change and has grown a lot in the last years. In terms of our system and working as a team, I think it was our best year, and I think we improved a lot, that’s why it is important not to lose our heads. Maybe, the fact that we didn’t get to the final, makes us look bad, but we are confident in the work we have done. We have a lot of things to improve, but I think that we are on the right path.”

“We must not forget that for the most part of the season we were the team that was performing the best. We have to hold onto that, work harder, and improve. That is the impression of the season I am left with. Not having made the final, and having played badly in the semi, will not cloud what I know we achieved, and what I feel within the team. We managed to establish a good sense of flow and we played well together, and us four players, Hector Guerrero, Tomacho, and everyone in our organisation knows it. That is what we are holding on to.”

What do you think was missing from Ellerstina?

“I don’t think it had anything to do with tactics. We just needed to manage our heads a bit better and reach the end of the season in better shape. We worked really hard, we made a lot of changes, many sacrifices, and we pushed ourselves. Maybe, because we were doing so well, playing well, we didn’t need to change, and we played the same every game. Maybe the other teams, like Las Monjitas, and I think La Dolfina, too, were having a different season to the one we were having, and they were forced to change things up. That probably helped them to take on the last bit of the season in a different way, and they arrived more prepared. We were distracted during the most important time of the year, and it is tough to accept, but that’s the truth. We need to improve that for next year, and know that our objective is Palermo. We need to be super prepared for the final stage of the season.”

Facundo Pieres—the only player to claim a title in all four of the 2018 international high goal seasons (he won the CV Whitney Cup in the US, as well as the USPA Gold Cup; in England he won the Queen’s Cup; in Sotogrande, the Gold Cup; and in Argentina, he was victorious in the Hurlingham Open)—also spoke about something which took many by surprise: Gonzalito’s new handicap (he went from 10-9).

“Handicaps are always a bit controversial,” he says. “It is tough. I have never got very involved because it is impossible to keep everyone happy. I think it would be great to develop a system where we don’t have to rely on handicaps as much, but more on team performance—that would be great. What I can say, as a teammate, and considering the opinions of all those that have come up to me to talk about this, is that it was one of Gonzalito’s best, if not the best, season of the last years, and I personally would not have put him down this year. It was one of his best years and he played very well all season. I think he played 10-goals, without a doubt. I am also aware that Ellerstina could not have stayed on 40-goals after failing to qualify for the Open final. Hopefully this will help us get back to 40-goals—that is what we have to aim for. We want Gonzalito to get his 10-goals back.”