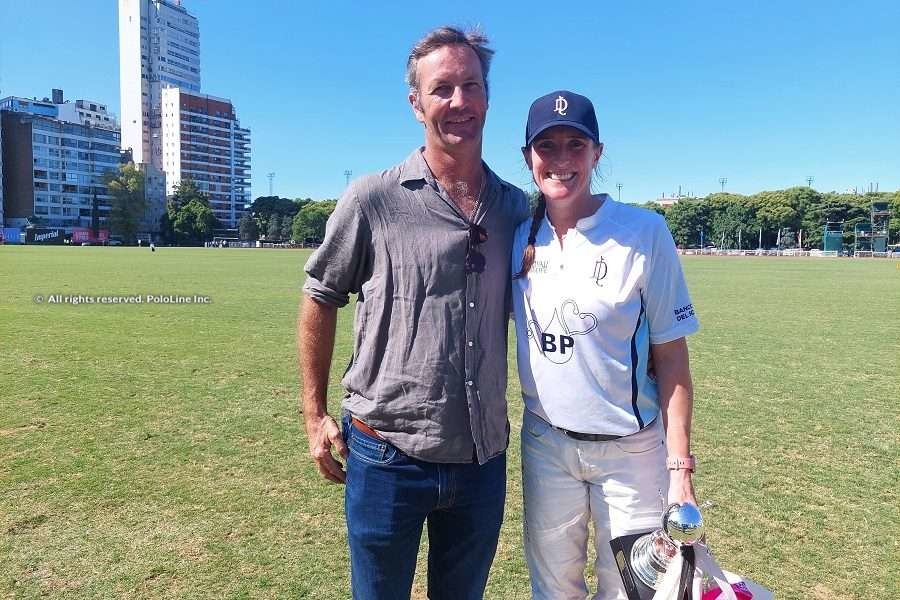 After a two year absence, Nina Clarkin, the talented English player and first ever woman to reach 10 goals (ladies handicap), returned to Argentina to play the fifth edition of the Women’s Argentine Open with La Dolfina BP. It was a remarkable comeback! The girls played a fantastic game against their biggest contender, El Overo Z7 UAE, a team that included two 10-goalers, Lia Salvo and Hazel Jackson. Both teams had claimed two titles a piece, but this year La Dolfina BP made it three following an impressive win in the final.

“I am back after two years and it feels amazing!” Nina told PoloLine after the match. “The team did so well from the start; and we knew we had to play against such a tough team in the final. But I was looking forward to it because the girls have improved a lot in the two years I’ve been away. I am so happy, I can’t ask for more. I am so pleased, it was so good!”

La Dolfina BP has an amazing coach in Milo Fernández Araujo, but Nina’s experience was crucial on the field. She played a key role putting the team together and helping them play their best. “Well, I gave them some advice,” she says. “I have the experience, and after seeing the girls’ talent, I only wanted to organise them and use them to their best ability. It’s the best thing I can bring to the team.”

After a two years absence, how did you feel playing in Argentina?

“To come and play this tournament, the most important in the world, is a pleasure, an honor. To be here is immense for us, it means a lot to all of us. To play with such good players, and against such good players, is a privilege, and to ride these horses, it couldn’t be any better. I was so excited to be here and play with  these great horses and team mates.”

Regarding the advice she gave her team mates, Nina says it was a lot of fun mixing English and Spanish: “My Spanish is embarrassing! But the girls speak very good English, so we communicate very well. We played as a team. We were four players at their best.”