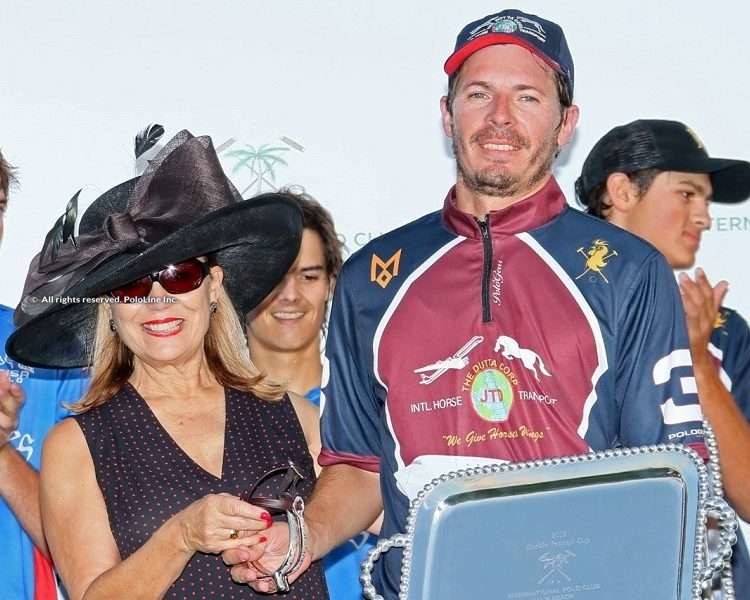 “I never thought we would do this well”

The intense season at International Polo Club Palm Beach is underway, and Dutta Corp have begun by winning the first two tournaments of the year: The Herbie Pennell Cup and the Joe Barry Cup. Timmy Dutta, Kris Kampsen, Lucas Díaz Alberdi and ‘Gringo’ Colombres were able to keep rivals Patagones at bay in both finals.

Colombres, who scored four goals in each of the defining matches, has had an amazing start to 2019. The thirty year old 7-goaler, named MVP in both finals, shares: “Imagine! We arrived fifteen days ago and have already won two titles. I never thought that we would do this well—and we were undefeated in both tournaments! This is the first year we are playing together and I think that we are doing pretty well in terms of horses and formation. I want the year to end right now!”

“Obviously it is an honour to be chosen as the MVP of both finals; it makes me very happy,” continues Colombres. “But that just highlights what a good team we have, because I can only play well when my teammates are working well. I was given the prize, but that just means that the team is on form. We also got the BPP award, which is the cherry on the cake, especially knowing that the horses are 60% of everything. We give our all to be well mounted, organised, and for the horses to go well on the day, so this is a fantastic prize, especially for the grooms and for the vets.”

With a promising high goal season ahead, Dutta Corp is ready to take on what will be a super competitive Ylvisaker Cup. Eight strong teams have registered to compete in the tournament, many boasting world class players who are making their debut in the competition, like Sapo Caset and Facundo Pieres. Considering their titles in the Herbie Pennell and the Joe Barry, Dutta Corp have earnt the right to feel confident: “We are going to try and win the Ylvisaker, and maintain our undefeated status,” states Colombres. “It would be absolutely amazing to win this tournament, but it is going to be tough. We are up against really good players and organisations, like Sapo Caset and Tonkawa, and Facundo Pieres and Pilot. The challenge will be to beat them. We are in a positive frame of mind, with high spirits, and ready for the next challenge.”

Once the Ylvisaker Cup finalises, International Polo Club will debut its ‘Gauntlet of Polo’, composed of the three traditional American Triple Crown tournaments: the CV Whitney Cup, the USPA Gold Cup and the US Open. Colombres, however, has other commitments. “After the 20-goal I am going to be playing the medium goal with Palm Beach Equine. We don’t have anything else planned with Dutta Corp yet, but we are hoping to play another 20-goal, or even the Gold Cup or US Open. We are seeing what else we can play together.”

Colombres, who has just reached 7-goals in Argentina, has become an integral part of the US high goal, be it in Wellington or in the New York area. “I started playing in the States about ten years ago,” he recalls. “I started as a groom to one of my uncle’s patrons, trying to find a way to play. I then got my handicap and started playing with Roberto González, who gave me my first jobs when I was 2- or 3-goals. That is how I started. Michel Dorignac and Gonzalo Avendaño gave me my first good jobs and that is how I was able to start bringing horses over, buy a trailer, and start getting organised. My family works with horses and knows a lot about them, but we don’t have the resources to do this, so this is all the result of a lot of hard work.”

“I started playing polo because my family played: My father, my uncle, my mother—everyone,” Gringo explains. “My father is a total horse fanatic. He worked a lot with Tomi Fernández Llorente when Tomi was playing the Open, and he learnt a lot there. When I started playing, my father had already retired and was working with new horses in Argentina; he no longer travelled as a professional or as a manager. He taught me everything, at the start at least, and we are still working together today.”

Colombres has had a spectacular start to the year in the US, but his 2018 was pretty good, too. In Argentina he reached the final of the Municipalidad del Pilar Cup, playing with La Dolfina; he also competed in the Cámara de Diputados Cup. In the Triple Crown, he acted as a substitute for La Dolfina Polo Ranch. “We had a great season in Argentina,” says Colombres. “The idea is to continue with La Dolfina. We are going to try and play the 2019 qualification with last year’s Cámara team [Joao Paulo Ganon, Tomasito Fernández Llorente and Isidro Strada]. It is not 100% confirmed. We’ll see how we get on in the qualification and then decide how to tackle the rest of the season, but that is our objective. Hopefully we will have Adolfito’s support when it comes to horses.”

“I have two primary objectives,” concludes Colombres. “In Argentina, I want to qualify for the Open, and in the States, I would love to play the US Open. It is unlikely that I will be able to play it this year, even though there is a slight chance that we will with Dutta Corp. So my main goal is to play the 2020 US Triple Crown. I also want to work on my string and improve overall.”