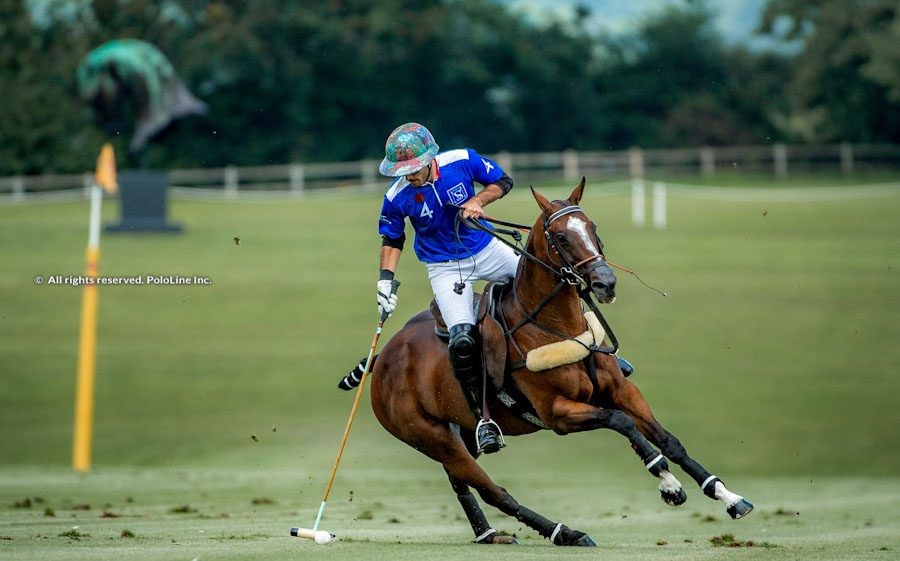 “The competition will be intense, but we’ll have fun with a very good team”

Facundo Sola, the Argentine player born in the province of Córdoba, is currently in England, where he is playing the 22-goal season with Murus Sanctus. The season kicked off with the Trippetts Challenge, hosted by Cowdray Park Polo Club. Corinne Ricard’s 2022 team will feature a brand-new lineup, with Alfredo Cappella joining Sola once again, and Marcos “Cacu” Araya joining the team.

Unlike previous years, Sola spent the first four months of 2022 in Argentina. This was for many reasons, but mainly due to his wedding to Rocío Rondina.  “I decided to stay in Argentina early in the year,” Facundo told PoloLine. “We had a long season, which began the first days of February. We played many practices in Murus, I went to Coronel Suárez to take part in the Belgrano Cup, and we also played the circuit for the República Argentina Cup. Last but not least, we participated and won the Ellerstina stage of the Argentina Polo Tour, with Corinne, Nacho Acuña and Joaco Pittaluga. That was good and helped us find the right shape for the season in England. We really had a good time; and moreover, since I’ve been injured, I wanted to slow down a bit.”

The French team’s British lineup has two new faces. “We decided to hire Cacu and Alfredo last year, after the end of the season in England, around August and September, when the teams start to come up,” continues Sola. “Sapo [Caset] went on to play with Marqués de Riscal, so we spoke to Alfre. Then, as we needed a 6-goaler, I called Cacu, with whom I have a great relationship. We have played against each other many times. He is a great player, so I can tell you that our team is very good, and we all get along very well”

How do you foresee the English season shaping up?

It will be very tough, there are several very good teams. The competition will be intense, but we do have a very good team which is a lot of fun. We will have a good time, and we also want to win games.

While there is a while to go before the start of the season in Argentina, Murus Sanctus has already confirmed the lineup that will be playing the Triple Crown. The addition of Juan Martín Nero and Pablo MacDonough in 2021 didn’t fulfill the expectations, so Facu and Sapo Caset will now be joined by Alfredo Bigatti and Jerónimo del Carril.

“Alfre invited us to play alongside him and Jero, because they stayed together when La Ensenada broke up,” says Sola. “The team sounds will be a lot of fun, as we all get along well. I’ve never played with the two of them, but they are great players, so I think we will have a lot of potential. We are very well organized, and each of us will play in our usual positions.”

Why do you think RS Murus Sanctus couldn’t make it with Pablo and Juanma?

We were unable to play together for a long time. I had an injury which didn’t allow me to play proper team practices. Then, Pablo got injured as well. Personally, I think it was my worst season in Argentina so far. If you are not able to play enough practices, you give your contenders advantages, both in terms of play and horses, because you are also not able to get the horses properly into shape. If you give such advantages at this level of play, you lose. I guess the team paid the consequences, because there was not a connection. That connection is won by playing practices, something we weren’t able to do as much as we wanted, unfortunately. It was a pity because we really had a very good team and I feel we could have done more.