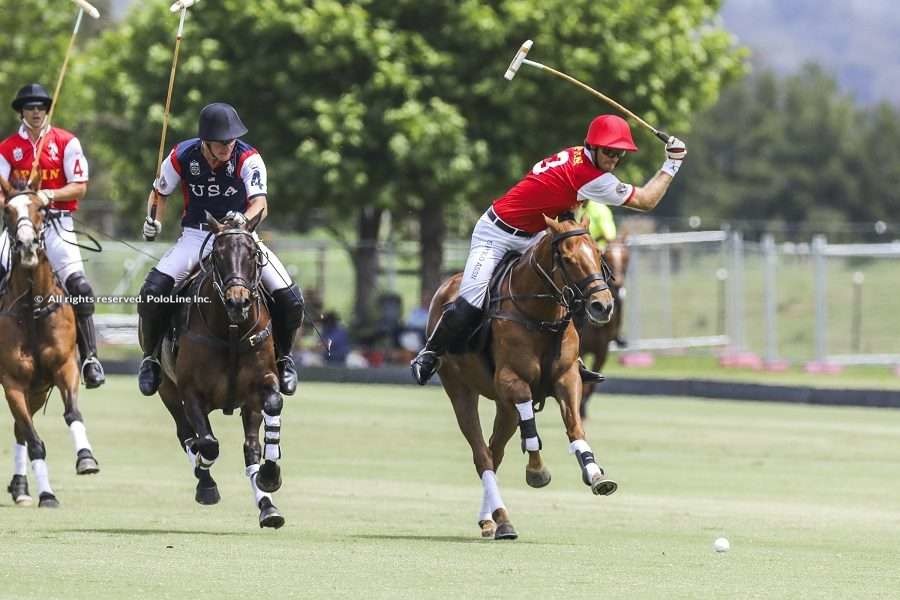 The United States Polo Association (USPA), U.S. Polo Assn., the official brand of the USPA, the International Polo Club Palm Beach (IPC) and Valiente Polo Farm are pleased to host the XII Federation of International Polo (FIP) World Polo Championship in Florida in 2022. Welcoming the international contest to the United States for the second time in the competition’s history, the 2022 tournament will be held from October 26 – November 6 at Valiente Polo Farm with the semifinals/final on the U.S. Polo Assn. Field at International Polo Club Palm Beach (IPC) in Wellington, Florida. Representing the top 10- to 14-goal teams from around the world, eight countries will contend for the highest honor in international polo competition.

Capturing the title in Germany in 1989, the United States will host the competition on American soil for the second time after a 24-year hiatus. Selecting the most talented players to represent the USA team on an international stage, the strengths of the United States lie in both high-quality horses and a prime location featuring world-class fields and facilities. Home to the GAUNTLET OF POLO®, IPC is the ideal venue to host the final of this renowned event, attracting South Florida’s passionate polo and equestrian community. Seeking to elevate the FIP World Polo Championship for players, sponsors and spectators, the United States is proud to accept the challenge and has prepared to deliver an unrivaled experience in 2022.

A defining feature of the XII FIP World Polo Championship are the 176 exceptional horses representing some of the best bloodlines in the world from sole horse provider J5 Equestrian. The organizational powerhouse behind the success of Valiente polo team, J5 Equestrian is dedicated to curating and breeding top horses from around the globe for over a decade. Building polo organizations which consistently win at the highest levels of the sport, J5 Equestrian has mounted teams such as La Dolfina, Scone (2021 USPA Gold Cup® and U.S. Open Polo Championship® winners), Dundas, SD Farms and Hawaii Polo Life (2020 and 2019 U.S. Open Women’s Polo Championship® winners). In the months leading up to the tournament the horses will be evaluated and ranked/graded A, B or C by FIP Official Horsemaster based on their ability and placed into evenly matched strings. Teams will then draw to select their pooled polo ponies. Featuring top-rated polo fields, VIP experiences for both fans and players, and corporate hospitality, the XII FIP World Polo Championship promises to be an unforgettable global event.

“We are extremely proud to host the 2022 XII FIP World Polo Championship and welcome teams from all over the world to Wellington, Florida, for the first time in the tournament’s history,” said USPA Chairman Stewart Armstrong. “Led by proven coach and FIP World Championship winner Julio Arellano, the USA team is in a great position to claim the coveted trophy after 33 years. This is an extraordinary opportunity to showcase the talent of our young American players and the exceptional horses of J5 Equestrian, one of the top organizations in America and the world.”

In 1982, in an effort to broaden the scope of international polo and restore the sport’s Olympic status, Marcos Uranga created the Federation of International Polo, officially recognized by the International Olympic Committee (IOC). Five years later, Uranga and American polo player Glen Holden organized the inaugural FIP World Polo Championship in Argentina. Aware of the challenges of fielding high-goal teams worldwide, FIP organizers decided to limit the competition to teams rated 10 to 14 goals.

“I would like to thank the USPA, U.S. Polo Assn. and Palm Beach County for their efforts to bring the FIP World Polo Championship to the U.S. and for their outstanding support throughout this process. Achieving this in these exceptionally difficult times speaks to the tremendous commitment of the USPA and U.S. Polo Assn. towards polo and the global polo community,” said Alex Taylor, FIP CEO. “We have all come together with the same goal—to expose more people around the world to this extraordinary sport.”

The FIP World Polo Championship is held every three to four years and countries seeking to host must go through a formal bidding process to determine the best facilities for an international tournament of this scale.

The XII FIP World Polo Championship was postponed to 2022 due to the COVID-19 pandemic. To qualify to be one of the eight teams selected to advance to the FIP World Polo Championship, the road begins with five zone playoffs and includes more than 25 countries vying for the opportunity of a lifetime to represent their nation on an international stage. The defending champions (Argentina in 2017) and host country (United States) automatically qualify with the remaining six teams (Zones A, B, D, E and top two teams from Zone C) competing and qualifying by the end of summer (August) 2022.

THE FIVE ZONES ARE AS FOLLOWS:

Selected as the coach for the USA team, former 9-goal professional Julio Arellano was on the winning team in 1989 and is humbled at the opportunity to lead the United States for a FIP title on home soil. “I am very honored to have been asked to coach the USA team,” Arellano said. “First, because my brother, Carlucho Arellano, and I have both represented the USA in the past and secondly, because the 2022 tournament is being held in the U.S.”

Outfitting the teams with official performance jerseys and equipment as the Official Apparel Sponsor, U.S. Polo Assn. is proud to once again partner with the FIP World Polo Championship to promote the brand during the pinnacle of international polo competition.

“Not only are we thrilled to have the FIP World Polo Championship back in the United States, but also for our brand, U.S. Polo Assn., to again be the Official Apparel Partner and Presenting Sponsor and one of the event’s biggest sponsors supporting all the teams, including the USA,” said J. Michael Prince, President and CEO of USPA Global Licensing. “This is truly a global event that will resonate with our consumers and sports fans around the world, across 194 countries. We are also excited our partners at ESPN will broadcast the championship final.”

Last hosted by the United States in 1998 at the Santa Barbara Polo & Racquet Club in Carpinteria, California, the 2022 tournament will draw the eyes of the global polo community to the winter equestrian capital of the world with the FIP World Polo Championship Semifinals and Final broadcast on ESPN for the first time. Games will also be available on GlobalPolo.com.