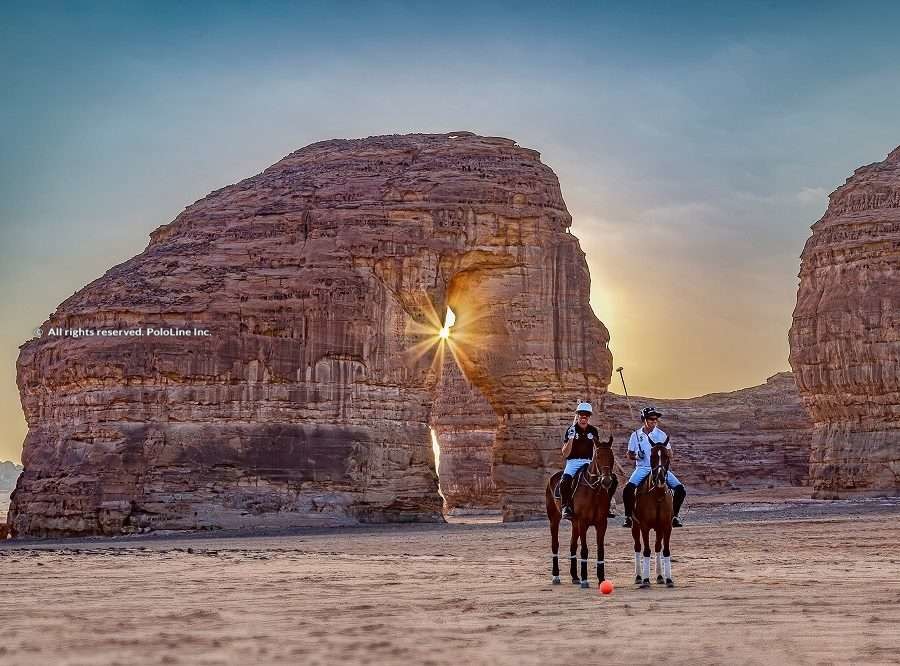 AlUlA Desert Polo, the first tournament to be held in Saudi Arabia, is set to be played from January 16 to 18, 2020, as part of the Winter at Tantora cultural festival, in the natural arena of the exquisite UNESCO heritage site in AlUla. This cultural gem will officially be open to the public in October 2020.

AlUla Desert Polo represents a milestone in Saudi Arabia’s sporting and social journey. A new concept in world polo, inspired by the snow polo held in St. Moritz, Switzerland, Desert Polo will see some of the most renowned players and patrons compete.

Organised by the Royal Commission for AlUla, in partnership with the Saudi Polo Federation, Desert Polo is one of the highlights of the three-month long Tantora festival, which runs from December through to March in the historic region.

“This tournament is a celebration of the transformational journey that we are making in Saudi Arabia. Our goal in promoting this extraordinary event is twofold. We want to tap into the undiscovered sporting talent that we know exists among young Saudi men and women and encourage greater levels of participation in our sport. We are also proud to use sport, and polo in particular, as a vehicle to showcase a truly unique destination and an incredible overall experience to the world. Saudi Arabia has the capability, the infrastructure and, crucially, the will, to stage major events on the world stage and Desert Polo is just one example of this.”

Amr AlMadani, the CEO of the Royal Commission for AlUla, welcomed the addition of Desert Polo to the prestigious and exciting roster of weekend events on the Winter at Tantora calendar:

“AlUla is a place that sums up to the world the rich and as yet widely undiscovered culture within Saudi Arabia,” he said. “A major contributor to the heritage in this part of the world is our peoples’ connection to the horse. Therefore, it is symbolic that we are showcasing the progress of modern day Saudi Arabia here, in one of our most significant cultural sites.”

About The Saudi Polo Federation

The Saudi Polo Federation (SPF) was established in July 2018 as a means of developing the sport across The Kingdom and establishing international best practice from grass roots to elite levels. Aligned with key government stakeholders such as the General Sports Authority, the SPF works to further establish Saudi polo in a global context, continuing the work already undertaken by Saudi’s private polo patrons on the international stage.

Chaired by renowned Saudi polo player and businessman, Amr Zedan, the SPF seeks to encourage the sport among young Saudi men and women in accordance with the goals set out in the Kingdom’s Vision 2030, while reflecting the transformational journey taking place in Saudi Arabia.

AlUla Desert Polo holds the distinction of two world firsts. It is the first modern polo tournament to be played in a desert environment at AlUla and is also the first official polo tournament to take place under the banner of the newly formed Saudi Polo Federation. A tournament of this stature demands a special venue and the unspoiled beauty of AlUla offers provides a perfect natural stage for such a distinguished and exciting event. Desert Polo along with the AlFursan Endurance race are two high profile equestrian events hosting during the Winter at Tantora festival, created to promote the horsemanship heritage of the destination.

What is Desert Polo?

Desert Polo is inspired by the famous St Moritz Snow polo, played on an ice lake in Switzerland. It is also the cousin of Beach Polo played all over the world in cities like Miami and Dubai, which is in turn a close relation of Arena Polo. Desert Polo is played on a smaller field than full-sized field polo and with only three players per team as opposed to four, it is a fast-paced, thrilling sport which allows spectators to get right alongside the action. The AlUla Desert Polo is designed to offer spectators a unique experience in AlUla combining experiences of horsemanship, elegance and equine athleticism with one of the fastest-paced and most unique team sports in the world.

How is it played?

Players in teams of three hit the ball with a long mallet from the back of a polo pony, attempting to score a goal by hitting the ball between the opposing team’s goal posts. When this happens the two teams change ends so that neither team has an advantage. Traditionally polo is played with a wooden ball of around three inches in diameter, but Desert Polo is played with a larger, lighter and brightly-coloured ball in order to encourage flowing play on the sandy surface.

*The Winter at Tantora festival will take place from December 19th, 2019, to March 7th, 2020, in AlUla, Saudi Arabia. Details about the festival, its line-up and exceptional surroundings can be found at experiencealula.com with tickets on sale now.

*Tickets and packages can be purchased on: