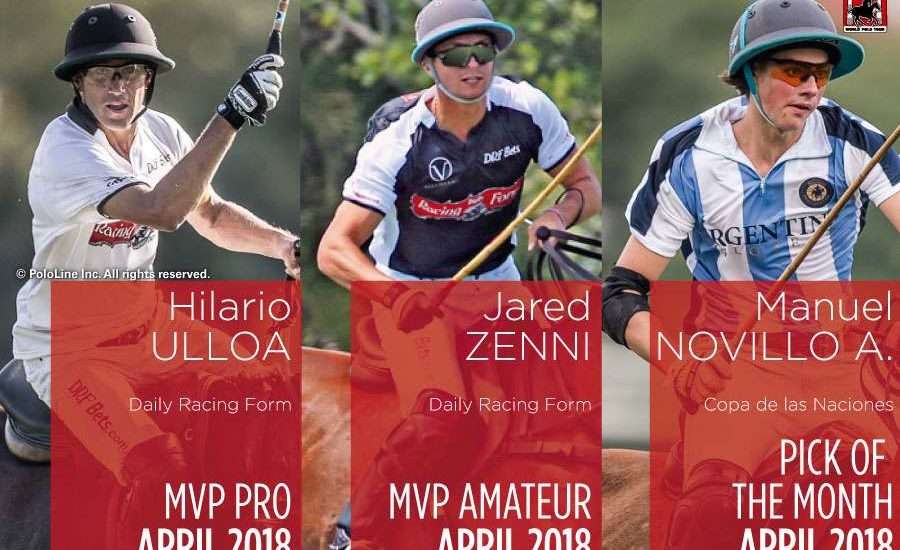 April has come to an end, and as is habitual, the World Polo Tour has announced the chosen ones of the month. April was as intense as ever, with competitive tournaments played in the US and in Argentina – the most important of these was undoubtable the US Open Polo Championship, which saw Daily Racing Form triumph over Valiente in the final.

Among the most notable changes in the world ranking after the US Open are:

Top 10:
Diego Cavanagh went down two places (8th to 10th) due to the new positions of Hilario Ulloa and Bob Jornayvaz.

PROFESIONAL: Hilario Ulloa
Ulloa has undoubtedly been the most outstanding player of the year so far. The leader of the team that will go down in history as having beaten Facundo Pieres and Adolfo Cambiaso in the same team. Daily Racing Form surprised everyone when they won the US Open, the most important tournament of the United States. Ulloa played together with Jared Zenni and Agustín Obregon in the 20-goal series, and they added Mariano Obregon to the team for the 26-goal. The biggest prize for Ulloa came when he was named the best mounted player of the season, a huge honour.

AMATEUR: Jared Zenni
The young American player is living the best moment of his sporting career so far. Together with his organisation, he put together a team of four players who will go down in polo history. Not only did they become champions of the most important competition in the country, but Zenni performed well, scoring important goals, especially in the final. With a US Open Championship under his belt, a new handicap (5-6) in both Argentina and the States, playing the Nations Cup in Palermo, and announcing his participation in the Qualification tournament for Hurlingham and Palermo alongside Agustín Obregon, Ezequiel Martínez Ferrario and Sebastián Merlos, Zenni is our amateur pick of the month.

PICK OF THE MONTH: Manuel Novillo Astrada
Son of the late Javier, the young sixteen year old continues to thrive. He represented Argentina in the Nation’s Cup, sharing Palermo’s number one field with Sapo Caset and Juan Martín Nero. In the game against USA, Manuel was able to show his growth and talent. Unfortunately, he must wait until September to play the tournament final against Colombia. But he won’t be forgetting April 2018 in a hurry!