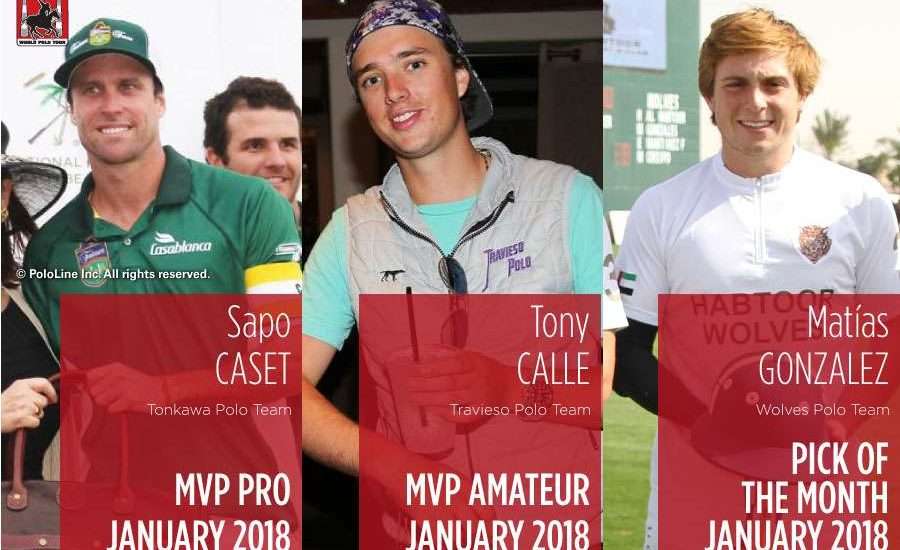 The WPT Has Announced The Stars of January

The World Polo Tour has announced the stars of January after what was an intensely competitive month, with tournaments such as the Joe Barry Cup, the McLaren Silver Cup, which kicked off the Dubai Gold Cup Series, the Thai Polo Open, and several other tournaments which got the year off to a thrilling start.

PRO: Sapo Caset
The brilliant Las Monjitas player has been on the rise since last year’s Triple Crown, where he played better than ever before, and regained his 10-goal handicap. Also playing off 10-goals in the US, Caset lead Tonkawa to Joe Barry Cup glory. He has been the playmaker and MVP of Jeff Hildebrand’s team. He was also the second player to have scored the highest number of goals in the tournament, with 34, only two goals behind Sebastian Merlos.

AMATEUR: Tony Calle
The young Travieso player had a great month, scoring goals for his team and being an important part of key plays. He is learning and growing alongside experienced players Sebastián Merlos and Tomás García del Río, and his father Teo. Tony already has 3-goals, and we’re sure to see his level improve over the coming seasons.

PICK OF THE MONTH: Matías González
The young player made his debut in Dubai with great results, in a team that brought out his potential. Alongside cousins Manuel Crespo and Ezequiel Martínez Ferrario, this 2-goal player made it to the semifinal of the McLaren Silver Cup, and scored four goals for his team.