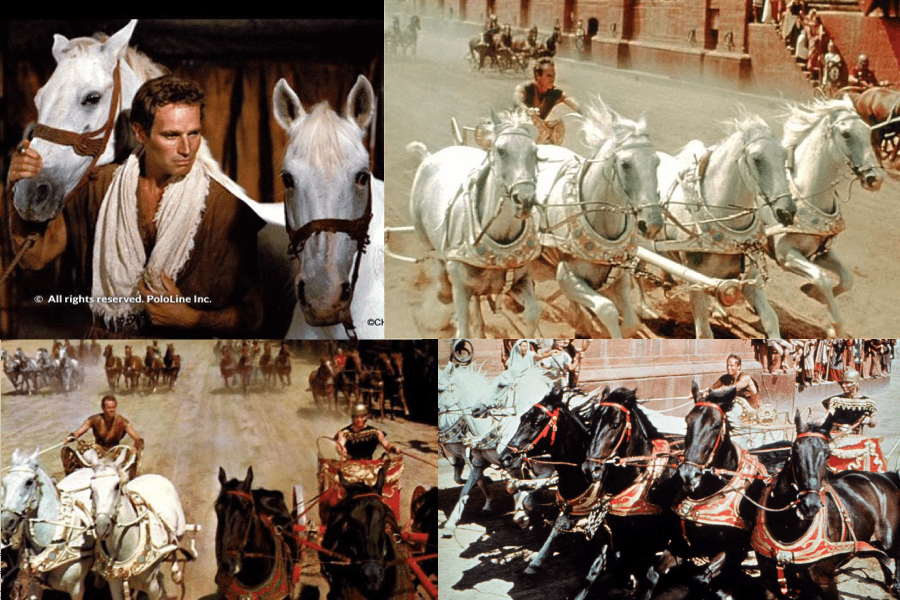 (Link to video below)

In the 50s, there was a boom of historical and epic movies, most of them set during the early years of Christianity and the Roman Empire, and they featured some of the biggest movie stars of the time. It is a well known fact that horses were vital, both as transport and on the battlefield, for the Roman Empire, so the role horses played in these movies was extremely important.

One of the key films of this genre was “Ben Hur” (1959), starring Charlton Heston, as the lead, Judah Ben Hur. The movie, which is considered a cultural treasure today, was awarded eleven Oscars. With a running time of over three hours, cinemas were obliged to split the movie in two. In the first half, Heston’s counterpart was Stephen Boyd, who played the role of the Roman Tribune, Mesala. Horses also play a great role during the film’s first half, particularly in one of the most memorable scenes in motion picture history: the chariot race at the Coliseum.

Ben Hur and Mesala used to be childhood friends, but they ended up as enemies. Following an unfortunate incident, the ambitious Mesala sends Ben Hur into exile, forcing him to become one of the galley slaves in a Roman galley flagship. After recovering his freedom, Ben Hur becomes a Prince, and meets Sheikh Ilderim, the proud owner of a string of splendid white horses. It was competition season at the Colisseum, so Ilderim invites Ben Hur to compete in the chariot races with his white horses, and take on Mesala’s unbeaten black horses.

But before the race, Ben Hur and Mesala have a rough encounter. The next time they see each other is in the arena during the chariot race. Mesala manages to tear several opponents apart, until he is left in a dramatic one-on-one with Ben Hur. But in the end, Mesala’s chariot is wrecked, and he is dragged behind his horses and trampled on by another chariot. Ben Hur and his splendid white horses emerge victorious.

The dramatic scene of the chariot race was shot at Cinecittá Studios, in Rome, on an arena track that covered 18 acres, the largest single set in motion picture history at the time. To set the track, many tonnes of white sand were brought over from Mexico. The track had to be strong enough to support the weight of the chariots, and, at the same time, very smooth, so as to avoid any damage to the horses when they ran around it over and over again during the training and filming sessions. A total of 18 Roman chariots were built; half of them went to Charlton Heston and Stephen Boyd. Both actors had to spend long hours training to learn to ride the chariots. For Heston, it was faster and easier to learn to ride the chariot, as he was a gifted and talented horse rider. The process took longer for Boyd, who had no experience with horses at all. It is worth noting that both actors decided to film their respective shots themselves, despite the dangers involved. They left only the extremely hazardous scenes to their doubles.

In 1958, Ben Hur’s director, William Wyler, brought Yakima Cannutt in to coordinate the chariot race scene, a job which included training Charlton Heston and Stephen Boyd. Cannut was a renowned stuntman, former rodeo driver, and was the most prestigious horses trainer in Hollywood, having developed special techniques for the difficult job. Cannutt and his team selected and tamed the 72 horses, split into eight chariots to shoot the scene. Even today, Cannutt’s safety methods are still used in movies that require horses. He was a pioneer, and recognised as the greatest trainer of Hollywood horses of his time, but Yakima Cannutt also had a short career as an actor – most notably, he was taught to ride a horse by one of his best friends: the legendary John Wayne.

Due to the extremely hot weather in Rome, the horses were allowed to run around the track eight times per day. Cannutt’s careful method was aimed at teaching horses how to run as a unit and tolerate eventual crashes between them, without causing any damage. And while some of the actors or extras suffered minor injuries while filming, it is worth noting that no horse was damaged in the shooting of the impressive scene that even today, over 60 years later, still gives viewers goosebumps.

The shooting of the chariot race scene took five weeks. In order to follow the horses closely, cameras were placed on top of Italian cars.

The splendid horses seen in the movie were mostly Andalusian and Lipizzans, and were brought from Yugoslavia and Sicilia. The whole film featured around 2,500 horses, and all of them had carers, trainers, veterinarians, and stable boys, among other requirements. The four beautiful white horses – the Andalusians – that were given to Ben Hur by Ilderim, were named after stars in Arabic – Aldebaran, Altair, Rigel and Antares, all foals of the lovely mare Mira. Even Ben Hur was impressed by the charm of these horses.

One significant detail in the movie is Ilderim’s anger when one of his “grooms” tries to force, without malicious intentions of course, one of his “beauties”, as he calls his horses. They must all be treated as precious jewels. In fact, Ilderim teaches Ben Hur his own exquisite method of training, certainly something very different to what was the norm 2,000 years ago: forgoing the whip and using hands.