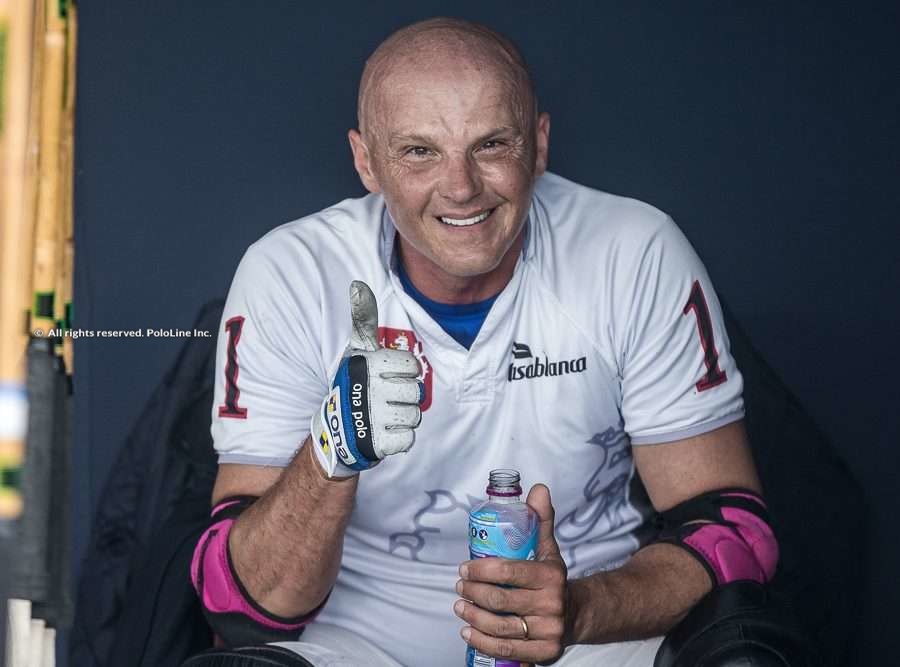 Monterosso has rapidly grown as an organisation, both on the field and in terms of structure; this is their third season playing the English high goal, and they are competing in several tournaments up to 22-goals, not just in the Queen’s Cup and the Gold Cup. Alessandro Bazzoni’s polo journey in England, however, began many years ago.

“I came to England for work, and I met my wife, Siri, who already played polo here,” tells Bazzoni. “She introduced me to English polo, and was the one who helped me build and organise the Monterosso UK project, which from the very beginning began participating in the English high goal. And this year, for the first time, we have a second team, playing the 15-, 16-, and 18-goal.”

“This is my third time playing the high goal in England,” he continues. “It is incredible, one of the best experiences of my life. For polo lovers, the best places to play are England and Argentina. We have a new team this year, with Joaquin Pittaluga, Cubi Toccalino, and Juan Gris Zavaleta. We have invested a lot in horses over the past three years, as well as strengthening the organisation by incorporating Milo Fernández Araujo and Pepe Araya.”

The name of the team, Monterosso, relates to Bazzoni’s hometown—Monterosso al Mare is the largest town in Cinque Terre, 450 km northeast of Rome. Bazzoni’s love of the town inspired him to name his organisation after it. He gave a further nod to his Italian roots in the Dominican Republic Polo Challenge by naming his team Cinque Terre.

Bazzoni recalls that the first polo tournament he played in his life “was the Prince of Wales, in Hurlingham, Argentina. I can’t remember exactly what year it was, but Martincito Aguerre was around fifteen or sixteen. I played with Nick Manifold, Naco Taverna, and Martincito Aguerre. It must have been ten or fifteen years ago.”

Monterosso is currently playing to defend their title in the Warwickshire Cup, crown tournament at Cirencester Park Polo Club. “Last year we did very well,” tells Bazzoni. “We won two titles—the Warwickshire Cup and the Prince of Wales Trophy—and we did pretty well in the Gold Cup, too.”

While the organisation grows and changes every season, there is one consistency—aside from Bazzoni himself—and that is the presence of Cubi Toccalino, who has also played a couple of seasons in the Dominican Republic with the Italian patron. “My relationship with Cubi has developed over the years, and I feel very confident next to him on the field,” says Bazzoni. “I greatly respect his professionalism. I trust that the relationship with Monterosso will continue to grow. On the other hand, this year we incorporated two important figures into the team—Pepe Araya and Milo Fernández Araujo—to further improve the performance of the organisation.”

But Monterosso is not just synonymous with a team playing the English high goal; it also incorporates Monterosso Vikings—a squad partaking in several different medium goal tournaments. “My wife is playing the medium goal,” says Bazzoni. “We are turning into an important organisation in England, and we are investing more so as to continue growing. Siri is playing with Ollie Cudmore, George Meyrick, and José Ramón Araya.” It is worth stating that Monterosso Vikings is currently doing very well in the Royal Windsor Cup.

After the Warwickshire Cup, Monterosso will be competing in the British Open Gold Cup, in Cowdray Park, where they will aim to do better than they did in the Queen’s. They form part of Group B, alongside, Scone, Talandracas, La Indiana and Dubai. Their objectives, however, spread beyond Europe. “After England, we are heading to Argentina to play there in November,” explains Bazzoni. “My wife and I are very competitive, and now we both have our own team. I just hope we don’t have to play against each other! I have played the República in Argentina before; this year I would love to play the Jockey Club Open.”

After that, Monterosso will return to the States. “We are going back to Palm Beach,” confirms Bazzoni. “My wife will play the 18-goal and I will play the 22-goal. My team is working there with Nick Manifold, since we have a long standing relationship with Los Machitos. We are still thinking about how to build the team, but we are now fully focused on the English season.”