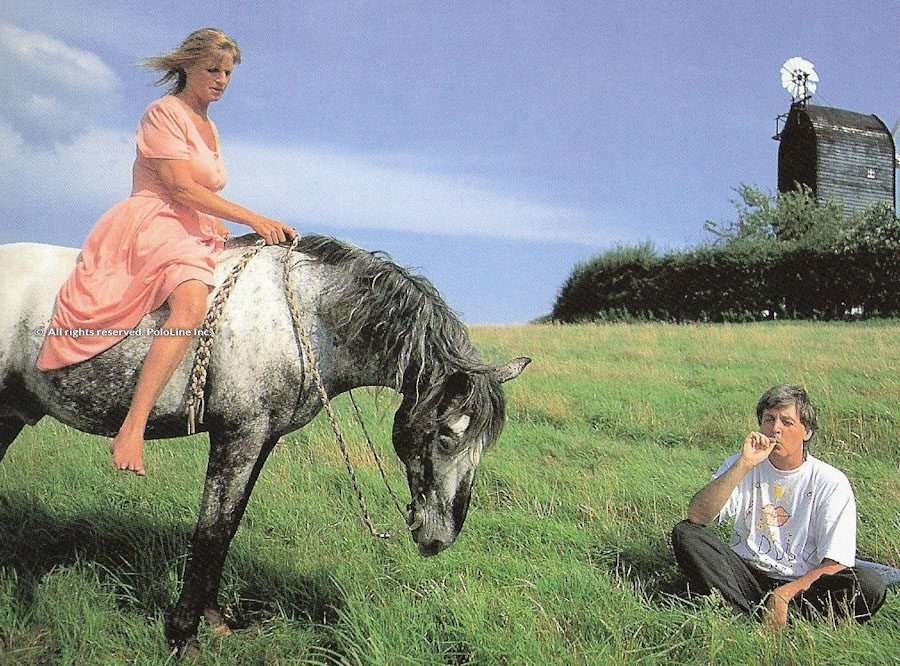 “You’re up on your beautiful Appaloosa stallion. It’s a fine spring day. We’re riding through the woods. The bluebells are all out, and the sky is a clear blue.”

These were the words the legendary member of The Beatles, Paul McCartney, whispered to his wife, Linda Eastman, just a few minutes before she died on April 17, 1998. She had been diagnosed with breast cancer in 1995, and overcame the illness; but a couple of years later, the illness metastasized to her liver and she only had a few months to live. Her passing marked the end of an unbreakable bond, a unique marriage that lasted 29 years. Paul remained by her side always; and it was Linda who introduced him to her passion – horses.

Linda Louise Eastman,  born on September 24, 1941, in Scarsdale, New York, who would have turned 80 today. In 1962, when she was 21, she married John Melville See and they had a daughter, Heather. At the same time, she started a career as a photographer, which led her to be hired by several magazines to capture images of rock stars. Following her divorce from See, she traveled to London take photographs of Georgie Frame’s concert, at the Bag O’Nails club. That is where she met the most desired bachelor of the time, Paul McCartney, the bass player of The Beatles. Linda and Paul met once again at ban manager Brian Epstein’s home, on the launch of the band’s new and album, “Sgt. Pepper’s Lonely Hearts Club Band.”

After the event, she returned to New York where she met up with Paul again. They then started their relationship in London. Although there was a strong physical attraction between the two of them, Paul says that what he liked the most about Linda was her “free mental attitude, she does not like to socialise that much and we both love nature. She is a free spirit, an artist”. Heather, Linda’s little daughter, was another strong bond between Paul and Linda. The couple married in a small ceremony in London, on March 12, 1969. They had three children–Mary, Stella and James–while Paul adopted Linda’s daughter, Heather. After The Beatles broke up in 1970, Paul, Linda, Heather and baby Mary went to live in the farm, in Scotland and Sussex, where they had horses. They enjoyed riding together in the lovely English countryside.

While she spent much of her life riding horses, Linda never owned one, until she purchased her first horse in England. However, she always managed to borrow horses from friends, and that way she learnt to ride. She became a skilful rider, who participated in many competitions and won many prizes in her teens. But the problem was that her family didn’t approve their daughter’s passion, and her father, Lee Eastman, refused to buy her horses. Paul McCartney shared this in an interview, in 2002: “When Linda was a child, a lot of her friends were bought horses by her parents, and every Christmas morning, she used to look out of her bedroom window and pray there would be a horse on the lawn, with a bow around its neck. But her father was never going to do that. It wasn’t his thing. When we got married, and she told me all these stories, I thought – Right, I’m going to be the first person to buy her a horse. She already had one named Cinnamon and loved it, but when she saw Lucky Spot, she was crazy for him!”

Appaloosa horses were Linda’s favourites. She used to ride a stallion she bred under the rules of the Appaloose Horse Club, originally established in Idaho, United States, in 1938. The Appaloosa horses are known for their distinctive spotted coat, the preferred in the breed, and where the name comes from. There are several other patterns, such as those with base coat colors, with three main characteristics: mottled skin, striped hooves, and eyes with a white sclera. The origins of the Appaloosa horse date back to the beginning of human life itself. There were Appaloosa horses in Persia, China, and later in Europe and the United States. The Appaloosa Horse Club improved the quality of the horses, making them more modern thanks to the addition of American Quarter Horse and Arabian bloodlines. In the United States, Appaloosa horses are extremely popular and are spread throughout every state. Not only they are they colourful and beautiful, but an Appaloosa horse is noble, friendly, clever, and adapts to any environment and situations.

The fact is that Paul, who never took real interest in horses – with the exception of some videos or photoshoots in his heyday as a Beatle – learned to ride and to love the horses thanks to the support and influence of his charismatic wife, a woman who was also a strict vegetarian and a strong defender of animals rights. She dedicated a lot of her time to her beloved horses, a passion she shared not only with Paul, but with two of her daughters, Mary and Stella. Mary, who is a renowned photographer like her mother, did photo exhibitions of horses, and Stella, one of the world’s most brilliant and famous fashion designers, presented a complete collection of horse print clothes many years ago.

A few months after Linda’s passing, in October 1998, “Wide Praire”, her posthumous album was released. The album includes a song called “Appaloosa”, dedicated to her beloved horses. And horses feature in Paul’s music, as well. When he re-launched a remastered edition of his 1980 record, “McCartney II”, he included a song, “All You Horse Riders”, with many equestrian terms included in the lyrics.

While Paul never stick-and-balled, he has a strong bond with polo. Many still remember his spectacular concert back in March 2019, at Palermo, during his fourth visit to Argentina. His official website, the conclusion of the South American leg of the tour, not only comments on the the magnificence of Argentine polo and horses, but states how impressed Paul was with the Cathedral, describing Palermo as one of the most amazing venues he was able to play at during his long and extraordinary career.

So, a few minutes before her departure, Paul’s last words to Linda were dedicated to her beloved horses; the horses she enjoyed riding until the day before she died; because Paul, knowing that she was terminally ill, decided not to tell her. Linda Louise Eastman left her love and her passion for horses as a legacy to her family.