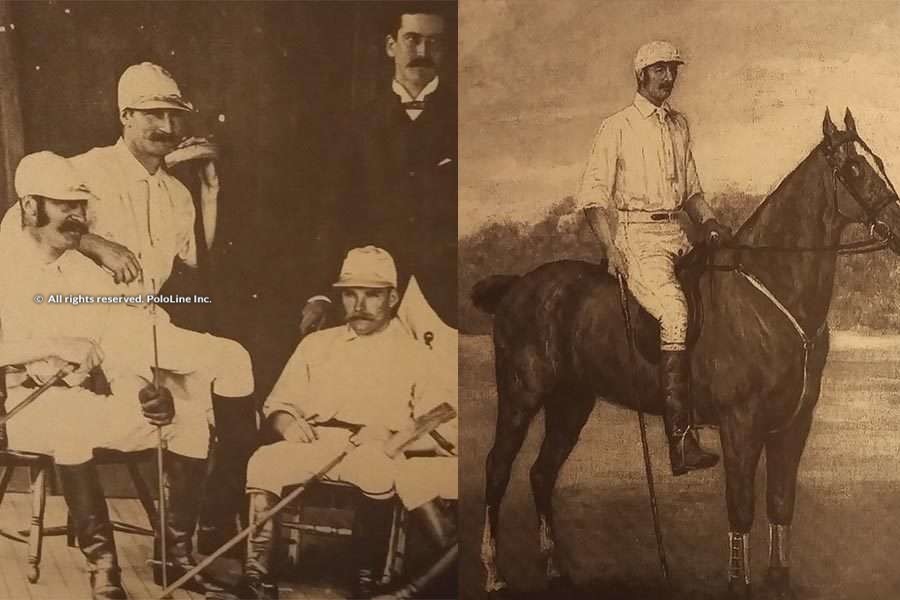 John Watson: The Backhander & The Importance of Team Play

There is a name in polo that is not familiar to many –  the name of someone who was a pioneer of the game in late XIX Century and the early years of XX Century: John Watson. His contribution to the sport was remarkable, as he set the foundations for the sport as we know it now. He is credited for having introduced two revolutionary elements into the sport in those early days of polo – the backhander and the concept of team play.

Known as the “Father of British Polo,” John Henry Watson was born in 1851 in Ballydarton, Carlow County, in Southwest Ireland. His family were known as gifted sportsmen, as well as hunters. According to reports, Watson started playing polo in 1870 on private grounds belonging to Horace Rochfort, the pioneer of polo in Ireland and a neighbour of the Watsons, set the Carlow Polo Club, in 1872. A year later, Rochfort founded the All Ireland Polo Club, where John Watson and his father, Robert, were regular players.

In 1874, John Watson joined the 13th. Hussars to serve in India, where he was able to watch a lot of polo, a sport that had already captivated the British officials and that was played in India for several centuries, albeit with no rules. Watson was so enthusiastic about polo, that his Commander-In-Chief, General Frederick Roberts, asked him to put together proper rules, something Watson agreed to do, in cooperation with others, including the British official, Captain Edward “Chicken” Hartopp. At the time, the Hurlingham Polo Committee, of which Watson was a member from 1887 to 1903, enforced only 39 rules.

Watson left the Army in 1884 as a Captain and he returned to Ireland, where polo was already a very popular sport, and clubs were popping up all over the country. Being such a polo enthusiast, Watson provided polo with a very significant change, introducing the backhand shot. The backhand or backhander, is considered a crucial defensive shot, executed mostly by the back in order to send the ball into the rival’s area and, occasionally, to avoid an eventual catastrophe. Who has not suffered while watching the back flying down the ground at full speed, hoping  to reach the ball about to pass through the goalposts, only to see them hit an accurate backhander and avoid their rivals from converting?

Today, the backhander is used by polo players all over the world, but in Watson’s days, even though it was an important development in the game, the shot had to overcome several obstacles before ti was accepted. The backhander made its debut in the first edition of the Westchester Cup, played in the US, in 1886. The Americans, who were not aware of it, declared it as an illicit stroke. Indeed, they put signs in the dressing rooms, warning that if a player hit a backhander, he would be sent off.  It is worth noting that Watson, the inventor  of the backhander, always played in the number 4 position.

Another significant achievement introduced by Watson was the concept of team play. He insisted that it was of the utmost importance that polo players play together as a whole. By the time Watson was back in Ireland the number of members per team was already four instead of five, but in 1885 no one cared about team work. This meant that a player could keep the ball as long as he could, with no need to pass it to a team mate. It was John Watson who changed this, showing that it was possible to play as a team and that by doing so the game could be more dynamic, giving all four players the opportunity to join forces. It was an overwhelming success, a move that changed polo forever.

In terms of his career as a player, John Watson won the Westchester Cup (1886, 1900), the Ranelagh Open (1898), the Champion Cup – the official name of the coveted Hurlingham Club Open Championship, England’s most important competition until the Second World War, and the Irish Open, also known as the All Ireland Cup, which he claimed no less than eight times, the first being in 1884. He is also credited to have founded the highly successful Freebooters team. The Freebooters was not a club – it was a “free” squad, joined by military and, later on, by civil players, in order to compete in specific tournaments in the late XIX Century and early XX Century.

Those who got to know John Watson, a very tall, strong, and impressive man, say he was charming – off the ground. Stories of his day note his “tremendous language”, and that his contenders were intimidated by him. This attitude changed towards the end of his career, as the new generation of players didn’t tolerate his tantrums.

In 1905, John Watson suffered a heart attack during a match in Phoenix Park, and that marked the end of his career as a polo player. From then on, he dedicated his time to hunting. His health continued to decline and he died in 1908 at the young age of 57.

John Henry Watson – a remarkable pioneer of polo, the “heart and soul of the sport,” as he was described in an obituary in a Carlow newspaper – left a mark on the sport, an immense legacy. While many won’t recall his story, his vision of the game carved a path that polo still treads today.