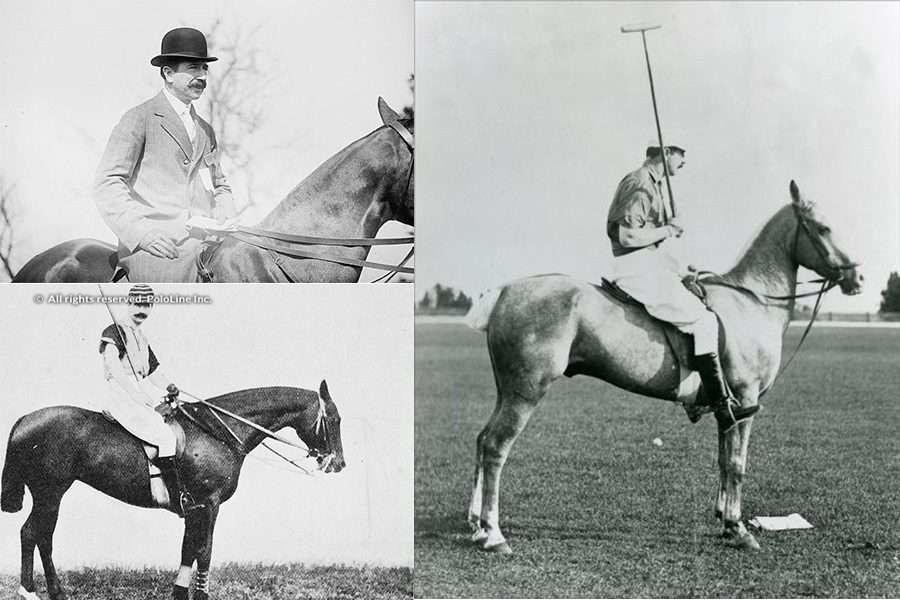 It is well known that England brought polo to the West from India around 1856, through the English officials who served there. The British made a proper set of rules and established the first governing body for the sport – the Hurlingham Polo Association.

In 1876, James Gordon Bennett, the so-called “father of American polo,” watched a game at Hurlingham, and he developed a huge enthusiasm for the sport. Such was his passion that he decided to bring it to his country. Bennett then prepared players and horses and he organised the first tournaments on American soil. The Americans put the icing on the cake, creating a handicap system in 1888.

Back then, the highest rating was set at 5 goals. In 1890, after the United States Polo Association (USPA) was founded under the chairmanship of H.L. Herbert, that rating was raised to 10. The following year, polo had its first ever 10-goaler, an American player named Foxhall Keene.

Foxhall Parker Keene was born on December 18, 1869, in San Francisco. Keene not only excelled at polo, as an exquisite horse rider and avid breeder, but he was also a gifted sportsman, achieving success in golf, tennis, motor racing, show jumping, fox hunting, and yachting. He is also remembered for his flamboyant lifestyle, composed of traveling the world, hosting lavish parties, buying big houses and flashy cars.

Affectionately known as “Foxie,” he was 7 years-old when his family moved to Newport, Rhode Island. That was where “Foxie” was given his first pony, a gift that marked the start of his interest and passion for horses.

But in 1884, the Keenes had to leave Newport due to financial problems. They moved to Babylon, New Island. A couple of years later, when the family’s financial situation improved, they relocated in Cedarhurst, close to Long Island, where, as “Foxie” recalled, there was a large sporting and equine community. When he was 14, neighbours were impressed by the boy’s equestrian skills. Foxie then joined Rockaway Hunting Club, in Nassau County, New York, and started to play polo.

Not only was Foxhall Keene destined to become an exceptional player – he always played at 3 – but he also took his job very seriously. He spent a much time practicing and had a daily routine of physical training, which was not that usual for polo players at the time. He paid attention to every detail, and he had saddles specifically made for each of his horses, so as to always be same distance from the ground. He had custom mallets made at Holbrow, in London, and he was one of few players to have an impressive number of horses in his stables – “the first ever player who used the big ponies in America”, he used to say.

In 1886, Foxhall Keene represented the US team in the first edition of the Westchester Cup, polo’s oldest trophy, which saw the team face the other driving force of polo, England. England won the two games series 10-4 and 14-2, but Foxhall Keene set the mark as the first player to score in an international match, converting one of the quickest goals yet, in just 24 seconds. Keene played the following series of the Westchester Cup (1886, 1900, 1902). He missed the 1913 series due to a broken collarbone.

His growing career in American polo with his team, Rockaway, his impressive skills and strength as a player, made him the only player who deserved to become the first ever 10-goaler in history, in 1891. He maintained this handicap until 1903, when the USPA made some unexpected adjustments, and Keene was lowered to 9. But in early 1917, the USPA raised five players, including Foxhall Keene, who would maintain his 10-goal status until his high goal retirement in 1920.

Keene also displayed his outstanding talent internationally. He went to England several times, during the London season, to play in clubs such as Hurlingham, Ranelagh, and Roehampton. In 1900 he went to Paris with the American team, The Foxhunters, to play in the Olympic Games, and earned the Gold Medal.

In 1929, Newell Bent wrote in ‘American Polo’: “Mr. Keene was a very brilliant and finished number 3 and his play in both England and America was so outstanding over so many years, that he was long considered above all other players in this country.”

Years before, in 1906, and English writer said: “Mr. Keene is generally looked upon in England and America as the finest all round player of his country (…). He knows the game thoroughly, has brilliant command of the ball, works hard and is an expert and dashing horseman.”

By the time he retired, in 1920, his several sporting injuries left a mark on his strong body. In 1935, almost bankrupt due to his lavish lifestyle, he moved to a small village in Canada, to live with his sister, Jesse. His health deteriorated and he died on September 25, 1941, at 71-years-old.

But “Foxie”, a remarkable player and person, never regretted one minute of it, as he stated in his autobiography, ‘Full Tilt’, written with Alden Hatch: “Now, I ride no more. My strength and skill and even the fortune which enabled me to live so royally, are spent. But if I had it all to do again, I would follow the same way. It was a life of pure delight.”

The recognition of his spectacular polo career, and his fantastic contribution to the sport, came in 1992, when he was inducted to the Polo Hall of Fame.

No one else was above Foxhall Keene. He was the only 10-goaler of his time. The next one would come in 1911, with Walter Buckmaster, the first ever British player to earn the maximum rating, and in 1913 Juan Traill would be the first player to reach 10 goals in Argentina. But that’s another story.