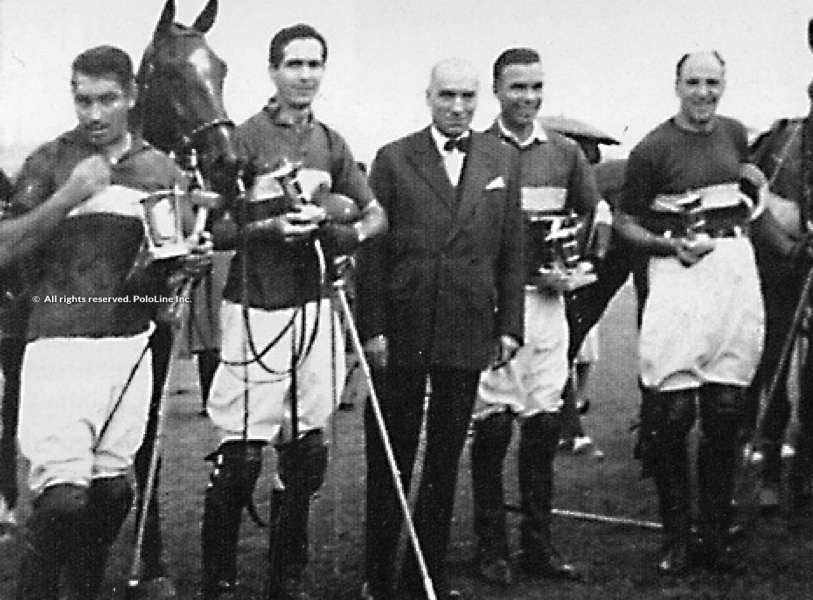 “Sir Winston Churchill always said that polo is a passport to the world. And that’s what the Coupe d’Or has always been to polo in Deauville.”

Jean-Edouard Mazery, the President of the International Polo Club de Deauville, a position he holds since 2015, provides the best definition of what the Coupe d’Or means to the club set in the Normandy, France, on a very special year – the prestigious golden trophy celebrates its 70th. anniversary. A tournament that’s played in a beautiful club, set in a lovely city that has been related to several things, such as literature, cinema, fashion, history and sports, since the Middle Ages.

And if it’s about sports, polo is one one of the most important achievements in the history of Deauville, a tradition that started in 1880, as a complement to horse racing in the sophisticated Hippodrome Le Touques, that saw the French aristocracy in attendance. The Club de Polo de Deauville was founded in 1907 by the Baron Robert de Rothschild, Captain Joubert and the Duke of Guiche (later Duke of Gramont). In those early days, the club was a place to meet friends;  a couple of years later it became a true polo club thanks to the Marquis of Villavieja.

By those years, the first grounds and stables were built and the first games and tournaments were played as well; one of those first tournaments was an open competition created by the Duke of Guiche, sorrounded by a sophisticated entourage – people á la mode were greeted in fashionable tents to enjoy tea, where the glamorous ladies took the opportunity to show their brand new and elegant hats created by a couturier, who was already the talk of the town, Gabrielle Chanel, better known as Coco. We are in 1912; back then, Coco was involved in a romantic relationship with a British aristocrat and polo player, Arthur “Boy” Capel, who was also a directive of the club, and who helped Coco to open the store that sold the hats that fascinated the ladies of Deauville.

Several personalities left a mark in the polo de Deauville before and after the two World Wars. Among others, King Alfonso XIII of Spain, Sir Winston Churchill, Lord Louis Mountbatten, the Shah Reza of Persia, as well as legendary players of those years, such as the first ever Argentininan 10-goaler, Juan Traill and American star, Tommy Hitchcock. At the same time, new tournaments were added, most of them during August. This made Deauville the ideal destination for aristocracy during the European summer.

Polo was stopped abruptly in 1939 due to the start of the II World World. And Normandy played a key role in the war, especially in the early hours of June 6 1944, with the historical disembark of the allied troops in its shores, known to history as the D-Day, under the code name of Operation Overlord. The same shores where polo horses are taken today for walks and training during stunning dawns. Once the nightmare of the war was over and after many years of austerity, in 1950, exactly 70 years ago, the Club de Polo de Deauville unveiled their most important event – the Coupe d’Or.

The Coupe d’Or was established by Francois Andre, the President and Founder of the Lucien Barriere Group, a chain of hotels and casino in Deauville. André had the idea to limit the handicap of the tournament to 20 goals, in order to give any polo player from all over the world the opportunity to play. And it was a complete success – thoroghout the years, the Coupe d’Or became one of the most coveted competitions in Europe, a tournament that attracted the most important polo players of their time.

The first ever winners of the Coupe d’Or, back in 1950, was The Franco Spanish Team, with Elie de Rothschild, J. Echavarrieta, R. Echavarriete and H. Coutourier. Elie de Rothschild would claim the Coupe d’Or in 1958 as well, with one of the most renowned teams of all times, Laversine, which lineup included the Gracida brothers, Pedro and Alejandro. The second edition of the Coupe d’Or, in 1951, went to another historical team, Cibao La Pampa, that featured one of the most charismatic and popular members of the summer in Deauville, the Dominican diplomat, celebrity and playboy Porfirio Rubirosa, better known as “Rubi”, who was joined by one of the best players of all times the Argentinian 10-goaler Charlie Menditeguy, who was his personal friend. Two Mexicans, Alejandro Gracida and Jesús Solórzano, completed the lineup.

The success of these first editions of the Coupe d’Or, attracted more and more stars of the sport to spend August in the lovely Deauville, as well as several people from all over the world, who not only emjoyed the skills of the best polo players but also to spend a great time in a sophisticated destination. And among those stars, there were a large number of remarkable polo families from Argentina, including many 10-goalers, who provided the Coupe d’Or with a unique prestige. Among others, the Zavaletas – maybe the polo family most related to French polo up-to-date -, the Heguys, Pieres, Trotz, Díaz Alberdi, Merlos, Bordieu, just to name a few.

And of course, France has always been very well represented in Deauville. As we said before, Elie de Rothschild’s Laversine, was the very first French team who claimed the coveted golden trophy, followed years later by today’s most powerful organisation within French polo – Sainte Mesme, established by the aristocrat Robert de Balkany, one of the most renowned polo personalities of France. De Balkany and Sainte Mesme won the Coupe d’Or in 1965, 1967 and 1969, the latter with the always remembered Eduardo “Gordo” Moore. Pointe Noire, Les Diables Bleus, La Palmeraie, Labegorce, Royal Barriere, In the Wings, HB and Talandracas are among those French organisations who lifted the Coupe d’Or, that has engraved names like Hubert Perrodo, Guy Wilderstein, Lionel and Stéphane Macaire, Brieuc Rigaux, Pierre-Henri N’Goumou, André Fabré and the Pailloncy brothers, Sébastien and Ludovic.

In addition to the French and Argentine stars, the Coupe d’Or have seen some of the best players from England, India, Spain, United States, Mexico  -including the whole Gracida family-. And many of them have left a mark among the palmarés of one of the most historical and traditional polo competitions not only in Europe but also worldwide.

Among the French representatives who engraved his name within the palmarés of the Coupr d’Or is no less than Jean-Edouard Mazery, who won the tournament in 2015, the same year he took the position as President of the club, with La Esperanza. “Our club celebrates the 70th. anniversary of our greatest pride, the Coupe d’Or”, told Mazery to PoloLine. “By greeting the best polo players and horses throughout these 70 years, Deauville not only has contributed to spread polo in France but also made Deauville one of the most important destinations within the international polo circuit”.

He adds: “This anniversary comes in such a challenging moment, with the world being at risk by an unprecedent pandemic, and which we have to face together. If we remain united we will beat this virus. And thanks to such an amazing willingness we are able to meet this year once again, to celebrate these wonderful 70 years. We’ve been preparing this celebration with the aim to promote and raise the values of our sport, and honor this happy meeting between polo and the city of Deauville, a city that has been greeting polo for more than a century”.

So, despite the international pandemic, Deauville is still celebrating 70 years of the glorious Coupe d’Or. “The club’s team follow the health and protocol measures strictly,” states Jean-Edouard Mazery. “But it is our wish to share our passion with the most people as possible, bring the best polo players of the world and put on an event for families in a friendly entourage. And mostly, spread and promote the sport, in order to maintain the legendary magic of this club”.

Winners of the Coupe d’Or

70 years of the Coupe d’Or in Deauville

Special thanks to Jean-Edouard Mazery and Justine Jacquemot for their contribution to this article.