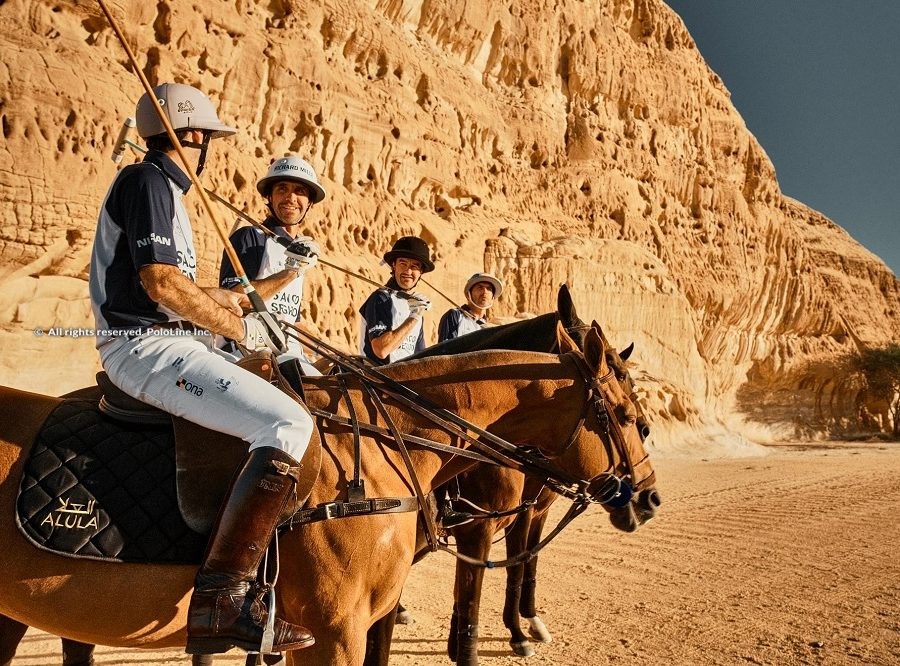 In just a few hours, one of the most anticipated events of the years will begin. AlUla Desert Polo, the first official polo tournament hosted in Saudi Arabia, is set to be played from January 16-18. The competition will form part of the Winter at Tantora Cultural Festival, and will be held at UNESCO World Heritage Site AlUla, which is located approximately 1000 kilómetros northwest of the capital Riyadh. The action will be streamed live on Pololine TV.

Amr Zedan, President of the Saudi Polo Federation, Mohammed Al Habtoor, Founder of the Dubai Gold Cup Series, and the four La Dolfina champions, are just some of the figures that will have the privilege of participating in this event at AlUla, a site which will only open to the public as of October 2020.

“It is great that we get to travel to places like this thanks to polo, places that we probably would never have known otherwise,” shares Adolfo Cambiaso, recent champion of the Argentine Open. “It makes me happy, it is fun, and we are going out there as a team. All four of us are friends, so it is going to be a wonderful trip. We have high expectations. You never know what will come of it in the future—this place can easily be made into a polo hub. Today we will play in the desert, and tomorrow there may be a grass field here. Trips like this bring our team closer together.”

Four teams, composed of three players each, will compete in this historic event. The sporting side is sure to be interesting, but the real star of the show will be the stunning location, and its historical context, being the first official polo tournament in Saudi Arabia.

Amr Zedan, President of the Saudi Polo Federation and winner of the Dubai Gold Cup, which he has played several times alongside Pablo Mac Donough, elaborates: “This is the first big event that will introduce polo to Saudi Arabia. It will also demonstrate the reach and status that this sport has as a whole. This might even be the first step in the development of the sport in the country. We are very proud to welcome the four best polo players in the world, who also happen to be friends. We are honoured that they have accepted our invitation; they will no doubt be great promoters of polo in South Arabia.”

Uruguayan David Stirling, the non-Argentine player boasting the most Argentine Open titles, will naturally form an important part of AlUla Desert Polo. “It is my first time in Saudi Arabia, so I am very excited about getting to know this new place. I have been in Dubai, but it is always great when polo takes you to new places. I enjoy learning about new cultures, and exploring different places. The event is going to be fantastic; a new Association has been formed, which is wonderful for polo as a whole. Amr Zedan, who I played alongside when I was in Dubai, and with whom Pablo [Mac Donough] has also played, invited us to come over. It is always good to meet new people and see how keen they are about getting into polo. Being able to travel with my teammates is awesome, it is always good to share trips like this. I am attracted to the idea of helping develop a new place where polo can thrive.”

Juan Martin Nero, ten time champion of the Argentine Open, was also excited to explore new places. “I love travelling, and learning about different cultures. I probably would have never come here if it were not for polo. Travelling with my teammates is a lot of fun. We are all travelling with a friend, so it is going to be fantastic. I also think that it is great that polo is developing in Saudi Arabia, and that matches become a familiar occurrence in these countries. The event is sure to be great, and very well organised, no doubt. I think it is very positive that La Dolfina are forming part of the first official tournament in Saudi Arabia.”

AlUla Desert Polo, organised by the Royal Commission for AlUla and the Saudi Polo Federation, will be streamed live on Saturday, January 18, on Pololine TV. As aforementioned, the event forms part of the Winter at Tantora Cultural Festival, which began on December 19, and concludes on March 7.

To conclude, Amr Zedan adds: “Our objective is to introduce polo to Saudi Arabia. It is fantastic that the event form part of the Winter at Tantora Cultural Festival. I would like to thank the Royal Commission for Alula, His Royal Highness Prince Badr Bin Farhan, and CEO Amr Saleh Almadani, for their unconditional support.”