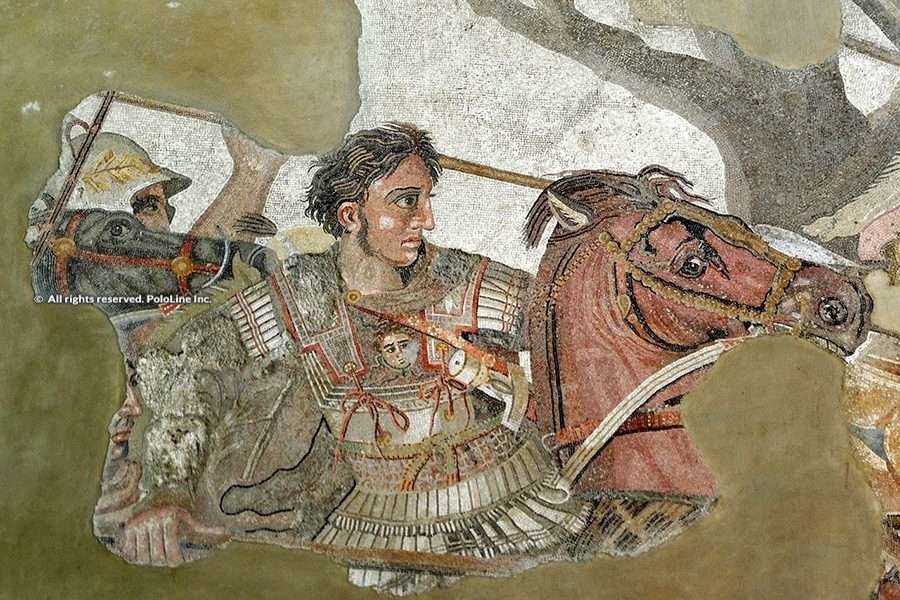 Alexander the Great & Bucephalus, to the conquest of the world

Alexander the Great is widely known as one of the most successful military commanders of history. By the age of 30, he created the largest empire of his time, known as the Hellenistic Period, in the IV Century BC. He remained undefeated in the battlefield and his victories earned him legendary status. He was King of Macedon, Hegemon of the Hellene League, Pharaoh of Egypt, Shahanshah of Media and Persis, Lord of Asia, after spending most of his reign in military campaign. His dominions extended to what is now India and Pakistan.

He was the son of King Philip II of Macedon and Olympias of Epirus. His father was in charge of his military education, while his intellectual education was led by Aristotle.

There are many myths surrounding Alexander the Great, and one of them, relates to polo. One of these legends tells that he used to play chovgan, a sport played by the Persians, considered to be an early version of polo. That’s why it is said that his rival, the powerful King of Persia, Darius III, sent him a polo mallet and a ball, suggesting that he should “stick to games and avoid war.” Alexander considered the offer an insult; whatever the intention was, Darius would regret the challenge. The conquest of Persia by the young King of Macedon – he was only 20 when he succeeded his father on the throne – in 331 BF was the quickest and most overwhelming military action in all antiquity.

Whether Alexander played polo is uncertain, but if he was as successful as he was on the battlefield, he may have been the first 10-goaler in history; a kind of Juancarlitos Harriott, Bautista Heguy, or Adolfo Cambiaso of his time.

And like these polo legends, Alexander the Great had a horse he cherished above the others, a beautiful black horse, with a large star on his brow, named Bucephalus. The story of Bucephalus, whose name means “Bull Head”, a horse considered one of the most famous in antiquity, is as legendary and his famous owner.

Many told Bucephalus’ story, but Greek historian Plutarch, perhaps provides the most accurate one. Plutarch says that Alexander’s father, King Philip of Macedon, purchased the horse. Shortly afterwards, he noticed that Bucephalus was wild, unmanageable, and rough. No one could approach the animal, not even the courtiers, who were gifted horse riders. In the end, Philip ordered to lead him away – it was impossible to tame him. But then came his son, the 15-years-old Prince Alexander.

Alexander offered to tame Bucephalus, a mission which seemed impossible. But he was given the chance – he stared at the horse and, as he spoke to him softly, he realised what others weren’t able to see. The cause of Bucephalus’ distress was that he was afraid of his own shadow. Alexander then turned the horse’s face towards the sun so he could no longer see his shadow. Slowly, Alexander took the reins, and to the surprise of his father and his courtiers, the young prince mounted a docile Bucephalus. According to Plutarch, the proud King Philip told to his son – “O my son look thee a Kingdom equal and worthy to thyself, for Macedon is to little for thee.”

The taming of Bucephalus gave Alexander a great deal of confidence and determination, and that led him to the conquest of the world. Meanwhile, Bucephalus allowed the grooms to take care of him but only Alexander could ride him. The duo were inseparable and indeed, he was the ideal partner and companion for the King.

Following the Battle of the Hydaspeds in 326 BC, Bucephalus died at 30-years-old. Some historians claim he died from battle wounds, while others said he died of old age. Eventually, Plutarch spoke of both possible causes. But all agree that Bucephalus’ passing brought terrible grief to Alexander, who loved his horse and considered him crucial in his military success.

Alexander the Great gave Bucephalus a burial with military honours and, in mourning, he founded a city in memory of his beloved horse, which he named Alexandria Bucephala, now known as the town of Jhelum, in Punjab, Pakistan. The existence of this town is referred in a medieval book called “Livre of Alexandre”, written in the XIII Century, and contains a poem dedicated to Alexander’s beloved companion.