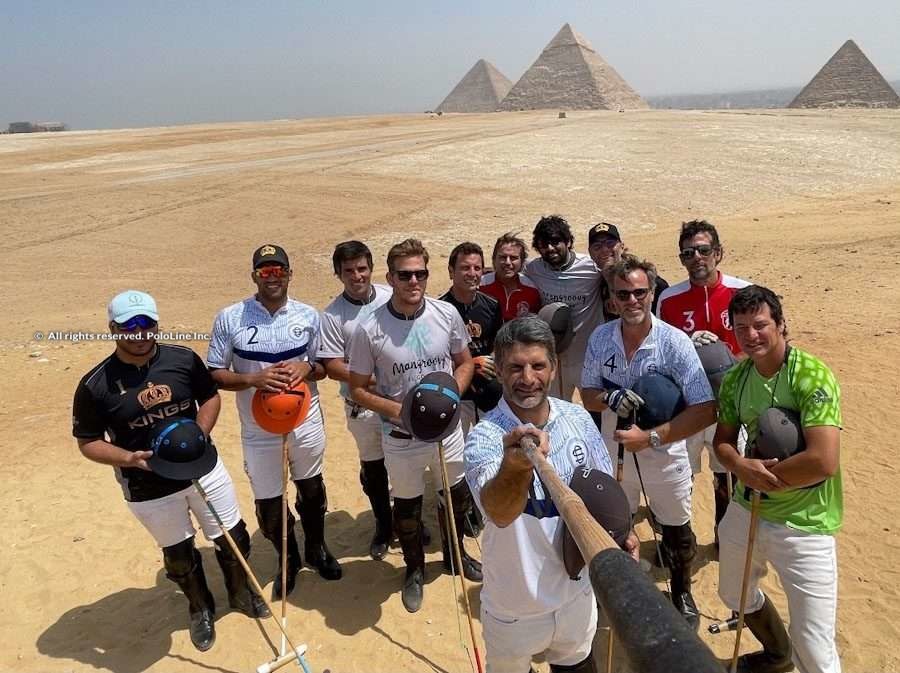 A visit to the magnificent pyramids of Egypt

PoloLine had the privilege of visiting Egypt for the first time last October to cover the action at Kings Polo Club, owned my Mohamed El Sewedy, patron of Kings Polo Team. The club, located just forty-five minutes from Cairo, boasts first class facilities and is developing an attractive project. This includes the expansion of their Polo Academy, more grounds, stables, and an arena, which will facilitate both polo lessons and arena polo competitions.

Eduardo Menéndez stated that Kings Polo Club “has a great future”. Last October, PoloLine was able to visit the club and witness the passion for polo there is in the country. We were also able to meet some of the most important local players. The trip included a look at Egypt’s historical and cultural wonders.

PoloLine was present with the polo players in one of the most iconic places in the world, the Giza Plateau, also called the Giza Necropolis – the largest pyramid complex in Egypt – located in Giza, on the outskirts of Cairo. It is the site of the pyramids built by three Pharaos of the Fourth Dynasty (around 2630 BC – 2500 BC): Khufu (also known as the “Great Pyramid” and the “Pyramid of Cheops”), Khafre (“Chephren”) and Menkaure (“Mykerinus”).

Three smaller monuments, built by Khufu, surround these major monuments. These are known as the “Queen’s Pyramids”, and were built specifically to bury the Queens. The Great Sphinx of Giza can also be seen in the complex of Giza. The sculpture shows the body of a lion with the face of, it is believed, Pharaoh Khafre. The fact that the sphinx has no nose has been the talk of the town for several centuries. Many historians state that a cannonball fired by Napoleon’s soldiers hit the sphinx’s nose, causing it to break off. The story seems false, however, as sketches of the Sphinx without a nose were drawn in 1737, and were discovered in 1755, before the era of the French Emperor. Whatever happened to the nose, the Great Sphinx of Giza has remained as one of the most impressive and popular monuments of the Giza complex.

Like the legend of the Great Sphinx’s nose, the mystery and meaning surrounding the pyramids of Egypt have fascinated historians and archaeologists for centuries. Everybody was captivated by the stories of Egyptian mythology and their “cult of the dead” – commanded by Anubis, god of death – mummification, embalming, afterlife, cemeteries, tombs, and the underworld. Anubis is depicted as a man with a jackal head. That’s why the embalmers, the priests that prepared the corpses to be mummified, used to wear a mask representing the face of Anubis. Following a very complex process, the mummy was wrapped in linen straps and introduced into an exquisitely designed coffin, known as a sarcophagus. The sarcophagus was then placed inside a chamber in the pyramid, where the walls were decorated by beautiful paintings and mysterious hieroglyphs. The sarcophagus was surrounded by several objects – which ancient Egyptians believed would be needed by the person in the afterlife – inside the tomb.

The pyramids were built with limestone, mortar and granite. Of the three, only Khafre’s pyramid retains part of its original polished limestone casing, near the apex. This pyramid appears larger than the adjacent Khufu pyramid due to it more elevated location, and the steeper angle of inclination of its construction; but it is smaller in both height and volume. The largest is the Pyramid of Khufu. To this date, it is the only ‘Seven Wonders of the Ancient World’ still in existence.  In 1958, UNESCO declared the Giza Complex as a World Heritage Site.

The interior of the pyramids has many chambers, antechambers, subterranean chambers, tight passageways, tunnels and large granite blocks to seal the tombs. For centuries, archaeologists navigated these dangerous interiors to discover the treasures hidden inside and to decipher the enigmatic hieroglyphs. The first man to decipher these was Jean-Francois Champollion- a French scholar, philologist and orientalist – during Napoleon’s campaign in Egypt from 1798-1801. The hieroglyphs not only described the life of the dead on earth, but also told of the life and customs of those times. Today, many of those treasures are in museums around the world, including the Museum of Cairo.